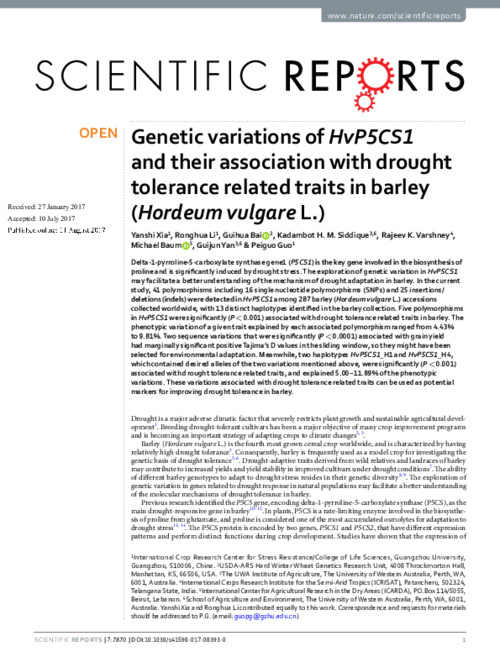 Delta-1-pyrroline-5-carboxylate synthase gene1 (P5CS1) is the key gene involved in the biosynthesis of proline and is significantly induced by drought stress. The exploration of genetic variation in HvP5CS1 may facilitate a better understanding of the mechanism of drought adaptation in barley. In the current study, 41 polymorphisms including 16 single nucleotide polymorphisms (SNPs) and 25 insertions/ deletions (indels) were detected in HvP5CS1 among 287 barley (Hordeum vulgare L.) accessions collected worldwide, with 13 distinct haplotypes identified in the barley collection. Five polymorphisms in HvP5CS1 were significantly (P < 0.001) associated with drought tolerance related traits in barley. The phenotypic variation of a given trait explained by each associated polymorphism ranged from 4.43% to 9.81%. Two sequence variations that were significantly (P < 0.0001) associated with grain yield had marginally significant positive Tajima’s D values in the sliding window, so they might have been selected for environmental adaptation. Meanwhile, two haplotypes HvP5CS1_H1 and HvP5CS1_H4, which contained desired alleles of the two variations mentioned above, were significantly (P < 0.001) associated with drought tolerance related traits, and explained 5.00~11.89% of the phenotypic variations. These variations associated with drought tolerance related traits can be used as potential markers for improving drought tolerance in barley.