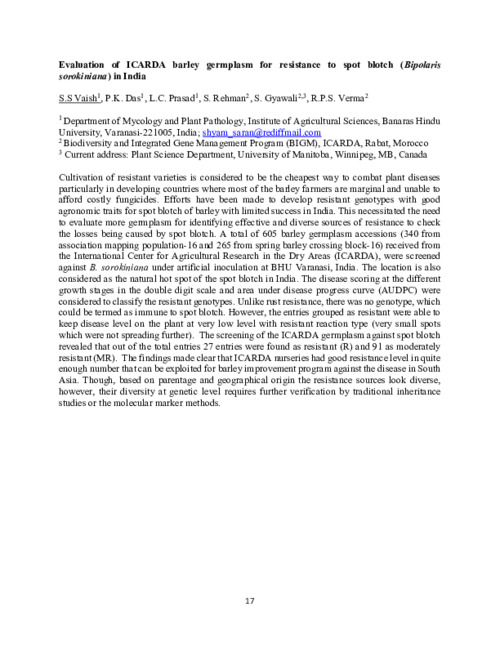 Cultivation of resistant varieties is considered to be the cheapest way to combat plant diseases particularly in developing countries where most of the barley farmers are marginal and unable to afford costly fungicides. Efforts have been made to develop resistant genotypes with good agronomic traits for spot blotch of barley with limited success in India. This necessitated the need to evaluate more germplasm for identifying effective and diverse sources of resistance to check the losses being caused by spot blotch. A total of 605 barley germplasm accessions (340 from association mapping population-16 and 265 from spring barley crossing block-16) received from the International Center for Agricultural Research in the Dry Areas (ICARDA), were screened against B. sorokiniana under artificial inoculation at BHU Varanasi, India. The location is also considered as the natural hot spot of the spot blotch in India. The disease scoring at the different growth stages in the double digit scale and area under disease progress curve (AUDPC) were considered to classify the resistant genotypes. Unlike rust resistance, there was no genotype, which could be termed as immune to spot blotch. However, the entries grouped as resistant were able to keep disease level on the plant at very low level with resistant reaction type (very small spots which were not spreading further). The screening of the ICARDA germplasm against spot blotch revealed that out of the total entries 27 entries were found as resistant (R) and 91 as moderately resistant (MR). The findings made clear that ICARDA nurseries had good resistance level in quite enough number that can be exploited for barley improvement program against the disease in South Asia. Though, based on parentage and geographical origin the resistance sources look diverse, however, their diversity at genetic level requires further verification by traditional inheritance studies or the molecular marker methods.