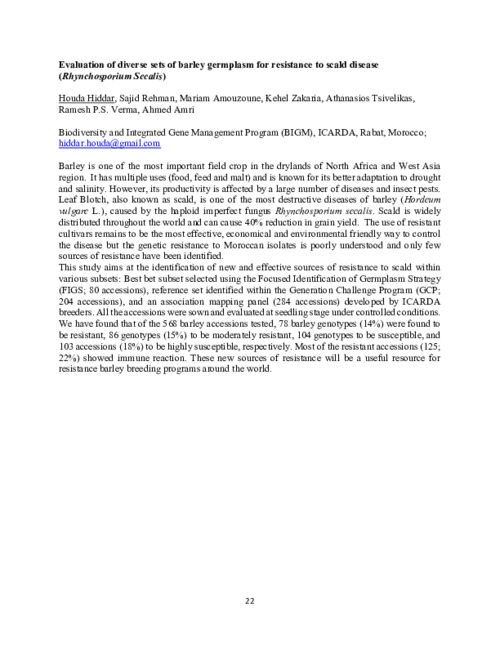 Barley is one of the most important field crop in the drylands of North Africa and West Asia region. It has multiple uses (food, feed and malt) and is known for its better adaptation to drought and salinity. However, its productivity is affected by a large number of diseases and insect pests. Leaf Blotch, also known as scald, is one of the most destructive diseases of barley (Hordeum vulgare L.), caused by the haploid imperfect fungus Rhynchosporium secalis. Scald is widely distributed throughout the world and can cause 40% reduction in grain yield. The use of resistant cultivars remains to be the most effective, economical and environmental friendly way to control the disease but the genetic resistance to Moroccan isolates is poorly understood and only few sources of resistance have been identified. This study aims at the identification of new and effective sources of resistance to scald within various subsets: Best bet subset selected using the Focused Identification of Germplasm Strategy (FIGS; 80 accessions), reference set identified within the Generation Challenge Program (GCP; 204 accessions), and an association mapping panel (284 accessions) developed by ICARDA breeders. All the accessions were sown and evaluated at seedling stage under controlled conditions. We have found that of the 568 barley accessions tested, 78 barley genotypes (14%) were found to be resistant, 86 genotypes (15%) to be moderately resistant, 104 genotypes to be susceptible, and 103 accessions (18%) to be highly susceptible, respectively. Most of the resistant accessions (125; 22%) showed immune reaction. These new sources of resistance will be a useful resource for resistance barley breeding programs around the world.