Evaluation of exotic barley germplasm against yellow rust in India 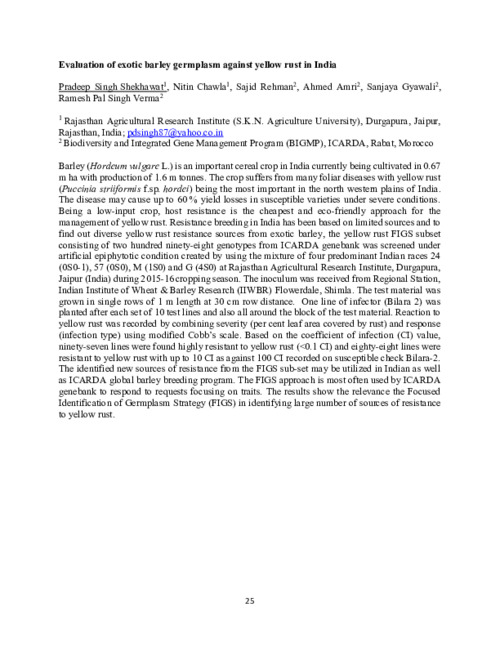 Barley (Hordeum vulgare L.) is an important cereal crop in India currently being cultivated in 0.67 m ha with production of 1.6 m tonnes. The crop suffers from many foliar diseases with yellow rust (Puccinia striiformis f.sp. hordei) being the most important in the north western plains of India. The disease may cause up to 60 % yield losses in susceptible varieties under severe conditions. Being a low-input crop, host resistance is the cheapest and eco-friendly approach for the management of yellow rust. Resistance breeding in India has been based on limited sources and to find out diverse yellow rust resistance sources from exotic barley, the yellow rust FIGS subset consisting of two hundred ninety-eight genotypes from ICARDA genebank was screened under artificial epiphytotic condition created by using the mixture of four predominant Indian races 24 (0S0-1), 57 (0S0), M (1S0) and G (4S0) at Rajasthan Agricultural Research Institute, Durgapura, Jaipur (India) during 2015-16 cropping season. The inoculum was received from Regional Station, Indian Institute of Wheat & Barley Research (IIWBR) Flowerdale, Shimla. The test material was grown in single rows of 1 m length at 30 cm row distance. One line of infector (Bilara 2) was planted after each set of 10 test lines and also all around the block of the test material. Reaction to yellow rust was recorded by combining severity (per cent leaf area covered by rust) and response (infection type) using modified Cobb’s scale. Based on the coefficient of infection (CI) value, ninety-seven lines were found highly resistant to yellow rust (<0.1 CI) and eighty-eight lines were resistant to yellow rust with up to 10 CI as against 100 CI recorded on susceptible check Bilara-2. The identified new sources of resistance from the FIGS sub-set may be utilized in Indian as well as ICARDA global barley breeding program. The FIGS approach is most often used by ICARDA genebank to respond to requests focusing on traits. The results show the relevance the Focused Identification of Germplasm Strategy (FIGS) in identifying large number of sources of resistance to yellow rust.