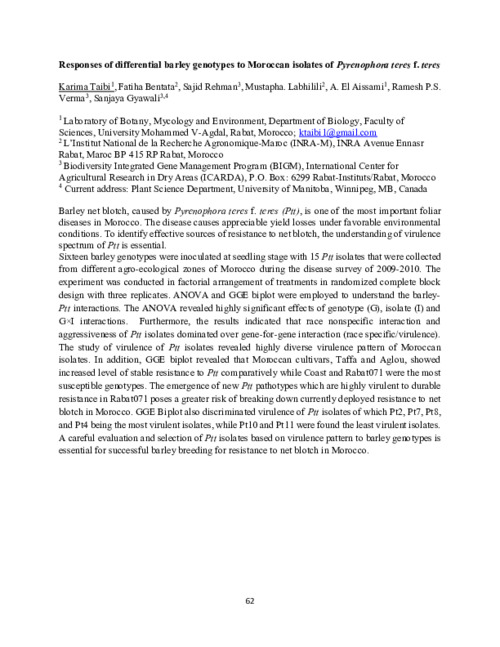 Barley net blotch, caused by Pyrenophora teres f. teres (Ptt), is one of the most important foliar diseases in Morocco. The disease causes appreciable yield losses under favorable environmental conditions. To identify effective sources of resistance to net blotch, the understanding of virulence spectrum of Ptt is essential. Sixteen barley genotypes were inoculated at seedling stage with 15 Ptt isolates that were collected from different agro-ecological zones of Morocco during the disease survey of 2009-2010. The experiment was conducted in factorial arrangement of treatments in randomized complete block design with three replicates. ANOVA and GGE biplot were employed to understand the barley- Ptt interactions. The ANOVA revealed highly significant effects of genotype (G), isolate (I) and G×I interactions. Furthermore, the results indicated that race nonspecific interaction and aggressiveness of Ptt isolates dominated over gene-for-gene interaction (race specific/virulence). The study of virulence of Ptt isolates revealed highly diverse virulence pattern of Moroccan isolates. In addition, GGE biplot revealed that Moroccan cultivars, Taffa and Aglou, showed increased level of stable resistance to Ptt comparatively while Coast and Rabat071 were the most susceptible genotypes. The emergence of new Ptt pathotypes which are highly virulent to durable resistance in Rabat071 poses a greater risk of breaking down currently deployed resistance to net blotch in Morocco. GGE Biplot also discriminated virulence of Ptt isolates of which Pt2, Pt7, Pt8, and Pt4 being the most virulent isolates, while Pt10 and Pt11 were found the least virulent isolates. A careful evaluation and selection of Ptt isolates based on virulence pattern to barley genotypes is essential for successful barley breeding for resistance to net blotch in Morocco.