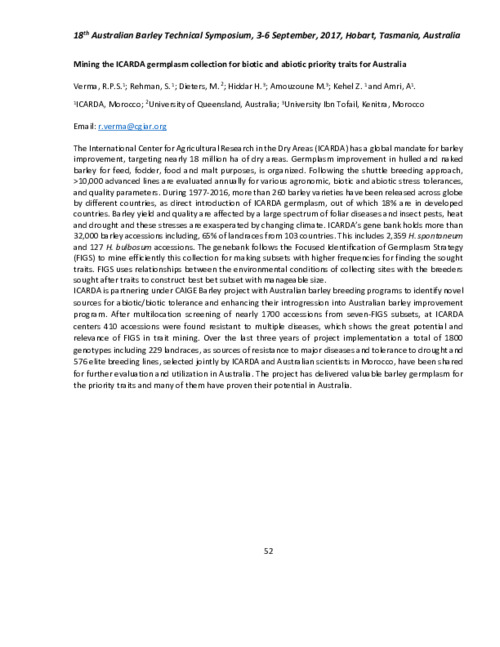 The International Center for Agricultural Research in the Dry Areas (ICARDA) has a global mandate for barley improvement, targeting nearly 18 million ha of dry areas. Germplasm improvement in hulled and naked barley for feed, fodder, food and malt purposes, is organized. Following the shuttle breeding approach, >10,000 advanced lines are evaluated annually for various agronomic, biotic and abiotic stress tolerances, and quality parameters. During 1977-2016, more than 260 barley varieties have been released across globe by different countries, as direct introduction of ICARDA germplasm, out of which 18% are in developed countries. Barley yield and quality are affected by a large spectrum of foliar diseases and insect pests, heat and drought and these stresses are exasperated by changing climate. ICARDA’s gene bank holds more than 32,000 barley accessions including, 65% of landraces from 103 countries. This includes 2,359 H. spontaneum and 127 H. bulbosum accessions. The genebank follows the Focused Identification of Germplasm Strategy (FIGS) to mine efficiently this collection for making subsets with higher frequencies for finding the sought traits. FIGS uses relationships between the environmental conditions of collecting sites with the breeders sought after traits to construct best bet subset with manageable size. ICARDA is partnering under CAIGE Barley project with Australian barley breeding programs to identify novel sources for abiotic/biotic tolerance and enhancing their introgression into Australian barley improvement program. After multilocation screening of nearly 1700 accessions from seven-FIGS subsets, at ICARDA centers 410 accessions were found resistant to multiple diseases, which shows the great potential and relevance of FIGS in trait mining. Over the last three years of project implementation a total of 1800 genotypes including 229 landraces, as sources of resistance to major diseases and tolerance to drought and 576 elite breeding lines, selected jointly by ICARDA and Australian scientists in Morocco, have been shared for further evaluation and utilization in Australia. The project has delivered valuable barley germplasm for the priority traits and many of them have proven their potential in Australia.