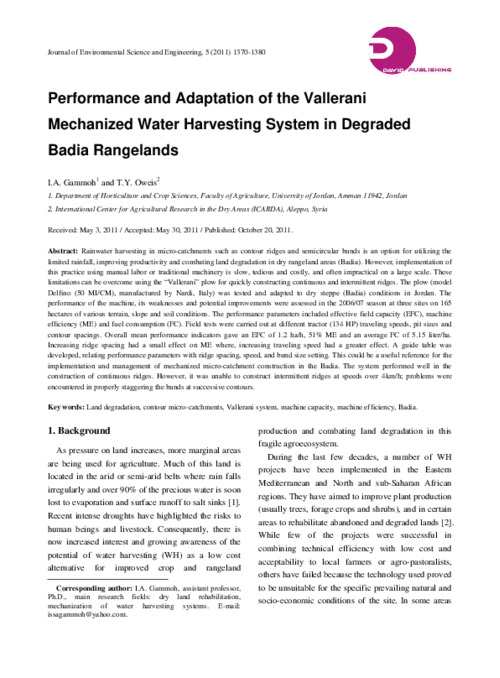 I. A. Gammoh, Theib Oweis. (20/10/2011). Performance and Adaptation of the Vallerani Mechanized Water Harvesting System in Degraded Badia Rangelands. Journal of Environmental Science and Engineering, 5, pp. 1370-1380.

Rainwater harvesting in micro-catchments such as contour ridges and semicircular bunds is an option for utilizing the limited rainfall, improving productivity and combating land degradation in dry rangeland areas (Badia). However, implementation of this practice using manual labor or traditional machinery is slow, tedious and costly, and often impractical on a large scale. These limitations can be overcome using the ‘Vallerani’ plow for quickly constructing continuous and intermittent ridges. The plow (model Delfino (50 MI/CM), manufactured by Nardi, Italy) was tested and adapted to dry steppe (Badia) conditions in Jordan. The performance of the machine, its weaknesses and potential improvements were assessed in the 2006/07 season at three sites on 165 hectares of various terrain, slope and soil conditions. The performance parameters included effective field capacity (EFC), machine efficiency (ME) and fuel consumption (FC). Field tests were carried out at different tractor (134 HP) traveling speeds, pit sizes and contour spacings. Overall mean performance indicators gave an EFC of 1.2 ha/h, 51% ME and an average FC of 5.15 liter/ha. Increasing ridge spacing had a small effect on ME where, increasing traveling speed had a greater effect. A guide table was developed, relating performance parameters with ridge spacing, speed, and bund size setting. This could be a useful reference for the implementation and management of mechanized microcatchment construction in the Badia. The system performed well in the construction of continuous ridges. However, it was unable to construct intermittent ridges at speeds over 4 km/h; problems were encountered in properly staggering the bunds at successive contours.