Effect of drought, heat and their interaction on the growth, yield and photosynthetic function of lentil (Lens culinaris Medikus) genotypes varying in heat and drought sensitivity 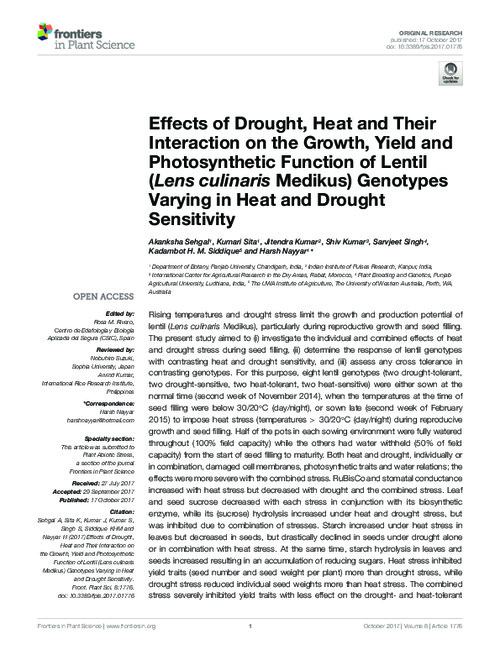 Rising temperatures and drought stress limit the growth and production potential of lentil (Lens culinarisMedikus), particularly during reproductive growth and seed filling. The present study aimed to (i) investigate the individual and combined effects of heat and drought stress during seed filling, (ii) determine the response of lentil genotypes with contrasting heat and drought sensitivity, and (iii) assess any cross tolerance in contrasting genotypes. For this purpose, eight lentil genotypes (two drought-tolerant, two drought-sensitive, two heat-tolerant, two heat-sensitive) were either sown at the normal time (second week of November 2014), when the temperatures at the time of seed filling were below 30/20∘C (day/night), or sown late (second week of February 2015) to impose heat stress (temperatures > 30/20∘C (day/night) during reproducive growth and seed filling. Half of the pots in each sowing environment were fully watered throughout (100% field capacity) while the others had water withheld (50% of field capacity) from the start of seed filling to maturity. Both heat and drought, individually or in combination, damaged cell membranes, photosynthetic traits and water relations; the effects were more severe with the combined stress. RuBisCo and stomatal conductance increased with heat stress but decreased with drought and the combined stress. Leaf and seed sucrose decreased with each stress in conjunction with its biosynthetic enzyme, while its (sucrose) hydrolysis increased under heat and drought stress, but was inhibited due to combination of stresses. Starch increased under heat stress in leaves but decreased in seeds, but drastically declined in seeds under drought alone or in combination with heat stress. At the same time, starch hydrolysis in leaves and seeds increased resulting in an accumulation of reducing sugars. Heat stress inhibited yield traits (seed number and seed weight per plant) more than drought stress, while drought stress reduced individual seed weights more than heat stress. The combined stress severely inhibited yield traits with less effect on the drought- and heat-tolerant genotypes. Drought stress inhibited the biochemical processes of seed filling more than heat stress, and the combined stress had a highly detrimental effect. A partial cross tolerance was noticed in drought and heat-tolerant lentil genotypes against the two stresses.