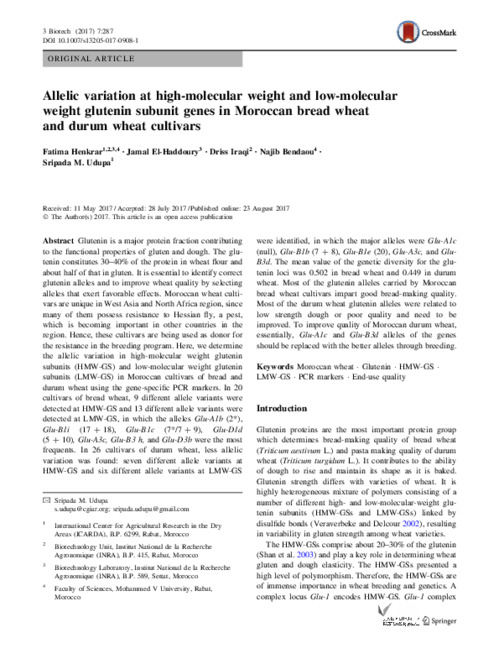 Glutenin is a major protein fraction contributing to the functional properties of gluten and dough. The glutenin constitutes 30–40% of the protein in wheat flour and about half of that in gluten. It is essential to identify correct glutenin alleles and to improve wheat quality by selecting alleles that exert favorable effects. Moroccan wheat cultivars are unique in West Asia and North Africa region, since many of them possess resistance to Hessian fly, a pest, which is becoming important in other countries in the region. Hence, these cultivars are being used as donor for the resistance in the breeding program. Here, we determine the allelic variation in high-molecular weight glutenin subunits (HMW-GS) and low-molecular weight glutenin subunits (LMW-GS) in Moroccan cultivars of bread and durum wheat using the gene-specific PCR markers. In 20 cultivars of bread wheat, 9 different allele variants were detected at HMW-GS and 13 different allele variants were detected at LMW-GS, in which the alleles Glu-A1b (2*), Glu-B1i (17 + 18), Glu-B1c (7*/7 + 9), Glu-D1d (5 + 10), Glu-A3c, Glu-B3 h, and Glu-D3b were the most frequents. In 26 cultivars of durum wheat, less allelic variation was found: seven different allele variants at HMW-GS and six different allele variants at LMW-GS were identified, in which the major alleles were Glu-A1c (null), Glu-B1b (7 + 8), Glu-B1e (20), Glu-A3c, and Glu-B3d. The mean value of the genetic diversity for the glutenin loci was 0.502 in bread wheat and 0.449 in durum wheat. Most of the glutenin alleles carried by Moroccan bread wheat cultivars impart good bread-making quality. Most of the durum wheat glutenin alleles were related to low strength dough or poor quality and need to be improved. To improve quality of Moroccan durum wheat, essentially, Glu-A1c and Glu-B3d alleles of the genes should be replaced with the better alleles through breeding.