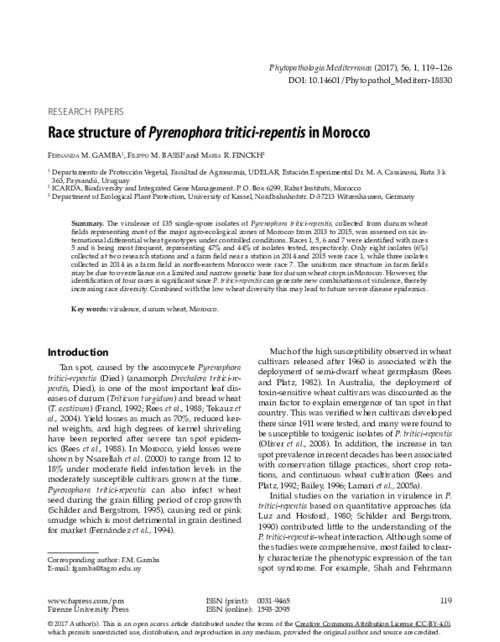 The virulence of 135 single-spore isolates of Pyrenophora tritici-repentis, collected from durum wheat fields representing most of the major agro-ecological zones of Morocco from 2013 to 2015, was assessed on six international differential wheat genotypes under controlled conditions. Races 1, 5, 6 and 7 were identified with races 5 and 6 being most frequent, representing 47% and 44% of isolates tested, respectively. Only eight isolates (6%) collected at two research stations and a farm field near a station in 2014 and 2015 were race 1, while three isolates collected in 2014 in a farm field in north-eastern Morocco were race 7. The uniform race structure in farm fields may be due to overreliance on a limited and narrow genetic base for durum wheat crops in Morocco. However, the identification of four races is significant since P. tritici-repentis can generate new combinations of virulence, thereby increasing race diversity. Combined with the low wheat diversity this may lead to future severe disease epidemics.