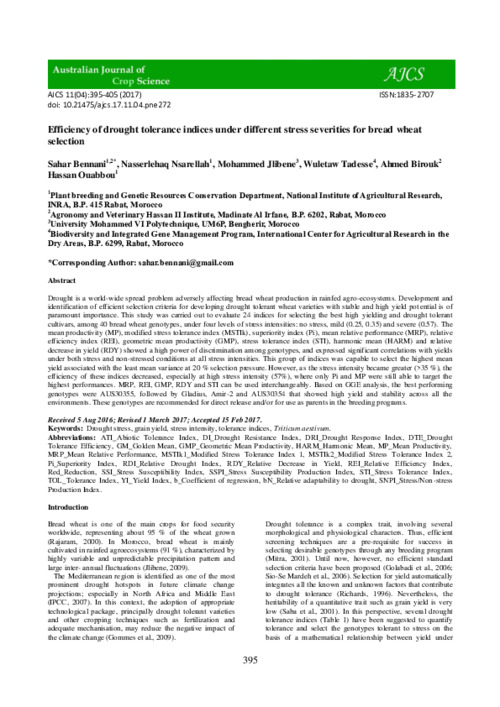 Drought is a world-wide spread problem adversely affecting bread wheat production in rainfed agro-ecosystems. Development and identification of efficient selection criteria for developing drought tolerant wheat varieties with stable and high yield potential is of paramount importance. This study was carried out to evaluate 24 indices for selecting the best high yielding and drought tolerant cultivars, among 40 bread wheat genotypes, under four levels of stress intensities: no stress, mild (0.25, 0.35) and severe (0.57). The mean productivity (MP), modified stress tolerance index (MSTIk), superiority index (Pi), mean relative performance (MRP), relative efficiency index (REI), geometric mean productivity (GMP), stress tolerance index (STI), harmonic mean (HARM) and relative decrease in yield (RDY) showed a high power of discrimination among genotypes, and expressed significant correlations with yields under both stress and non-stressed conditions at all stress intensities. This group of indices was capable to select the highest mean yield associated with the least mean variance at 20 % selection pressure. However, as the stress intensity became greater (>35 %), the efficiency of these indices decreased, especially at high stress intensity (57%), where only Pi and MP were still able to target the highest performances. MRP, REI, GMP, RDY and STI can be used interchangeably. Based on GGE analysis, the best performing genotypes were AUS30355, followed by Gladius, Amir-2 and AUS30354 that showed high yield and stability across all the environments. These genotypes are recommended for direct release and/or for use as parents in the breeding programs.