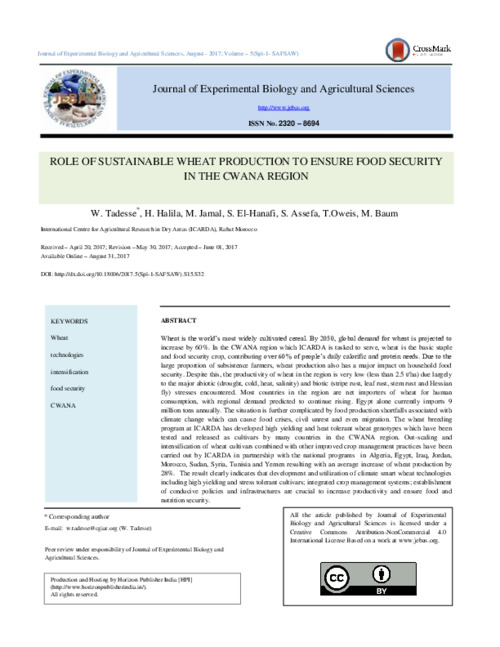 Wheat is the world‟s most widely cultivated cereal. By 2050, global demand for wheat is projected to increase by 60%. In the CWANA region which ICARDA is tasked to serve, wheat is the basic staple and food security crop, contributing over 60% of people‟s daily calorific and protein needs. Due to the large proportion of subsistence farmers, wheat production also has a major impact on household food security. Despite this, the productivity of wheat in the region is very low (less than 2.5 t/ha) due largely to the major abiotic (drought, cold, heat, salinity) and biotic (stripe rust, leaf rust, stem rust and Hessian fly) stresses encountered. Most countries in the region are net importers of wheat for human consumption, with regional demand predicted to continue rising. Egypt alone currently imports 9 million tons annually. The situation is further complicated by food production shortfalls associated with climate change which can cause food crises, civil unrest and even migration. The wheat breeding program at ICARDA has developed high yielding and heat tolerant wheat genotypes which have been tested and released as cultivars by many countries in the CWANA region. Out-scaling and intensification of wheat cultivars combined with other improved crop management practices have been carried out by ICARDA in partnership with the national programs in Algeria, Egypt, Iraq, Jordan, Morocco, Sudan, Syria, Tunisia and Yemen resulting with an average increase of wheat production by 28%. The result clearly indicates that development and utilization of climate smart wheat technologies including high yielding and stress tolerant cultivars; integrated crop management systems; establishment of conducive policies and infrastructures are crucial to increase productivity and ensure food and nutrition security.