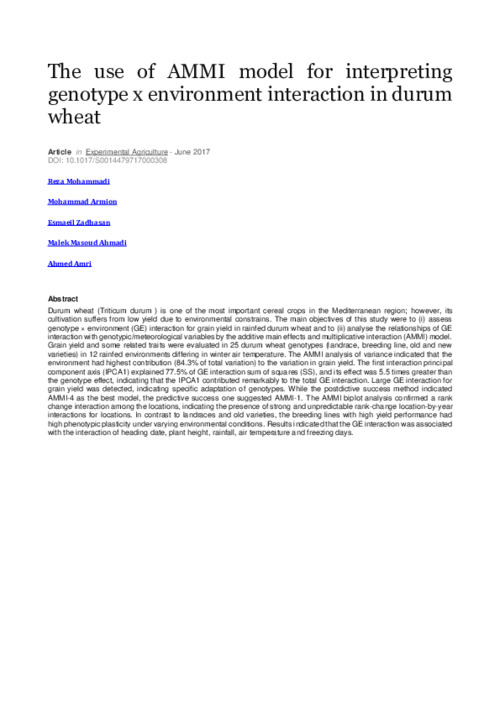 Durum wheat (Triticum durum) is one of the most important cereal crops in the Mediterranean region; however, its cultivation suffers from low yield due to environmental constrains. The main objectives of this study were to (i) assess genotype × environment (GE) interaction for grain yield in rainfed durum wheat and to (ii) analyse the relationships of GE interaction with genotypic/meteorological variables by the additive main effects and multiplicative interaction (AMMI) model. Grain yield and some related traits were evaluated in 25 durum wheat genotypes (landrace, breeding line, old and new varieties) in 12 rainfed environments differing in winter air temperature. The AMMI analysis of variance indicated that the environment had highest contribution (84.3% of total variation) to the variation in grain yield. The first interaction principal component axis (IPCA1) explained 77.5% of GE interaction sum of squares (SS), and its effect was 5.5 times greater than the genotype effect, indicating that the IPCA1 contributed remarkably to the total GE interaction. Large GE interaction for grain yield was detected, indicating specific adaptation of genotypes. While the postdictive success method indicated AMMI-4 as the best model, the predictive success one suggested AMMI-1. The AMMI biplot analysis confirmed a rank change interaction among the locations, indicating the presence of strong and unpredictable rank-change location-by-year interactions for locations. In contrast to landraces and old varieties, the breeding lines with high yield performance had high phenotypic plasticity under varying environmental conditions. Results indicated that the GE interaction was associated with the interaction of heading date, plant height, rainfall, air temperature and freezing days.