Status of species richness and Scorzonera judaica species at four 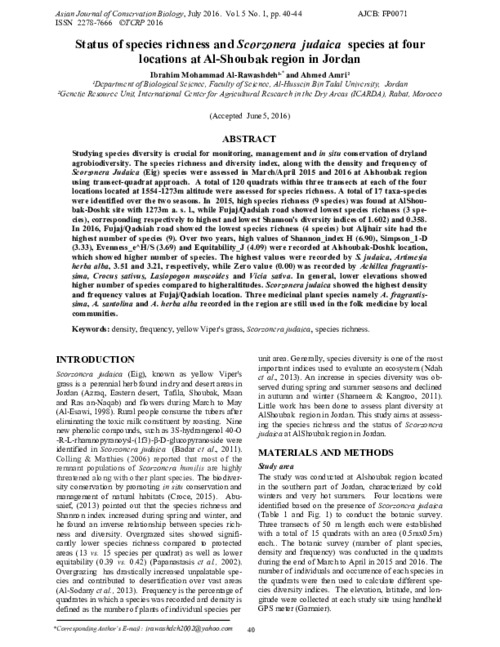 Studying species diversity is crucial for monitoring, management and in situ conservation of dryland agrobiodiversity. The species richness and diversity index, along with the density and frequency of Scorzonera Judaica (Eig) species were assessed in March/April 2015 and 2016 at Alshoubak region using transect-quadrat approach. A total of 120 quadrats within three transects at each of the four locations located at 1554-1273m altitude were assessed for species richness. A total of 17 taxa-species were identified over the two seasons. In 2015, high species richness (9 species) was found at AlShoubak-Doshk site with 1273m a. s. l., while Fujaj/Qadsiah road showed lowest species richness (3 species), corresponding respectively to highest and lowest Shannon's diversity indices of 1.602) and 0.358. In 2016, Fujaj/Qadsiah road showed the lowest species richness (4 species) but Aljhair site had the highest number of species (9). Over two years, high values of Shannon_index H (6.90), Simpson_1-D (3.33), Evenness_e^H/S (3.69) and Equitability_J (4.09) were recorded at Alshoubak-Doshk location, which showed higher number of species. The highest values were recorded by S. judaica, Artimesia herba alba, 3.51 and 3.21, respectively, while Zero value (0.00) was recorded by Achillea fragrantissima, Crocus sativus, Lasiopogon muscoides and Vicia sativa. In general, lower elevations showed higher number of species compared to higheraltitudes. Scorzonera judaica showed the highest density and frequency values at Fujaj/Qadsiah location. Three medicinal plant species namely A. fragrantissima, A. santolina and A. herba alba recorded in the region are still used in the folk medicine by local communities.