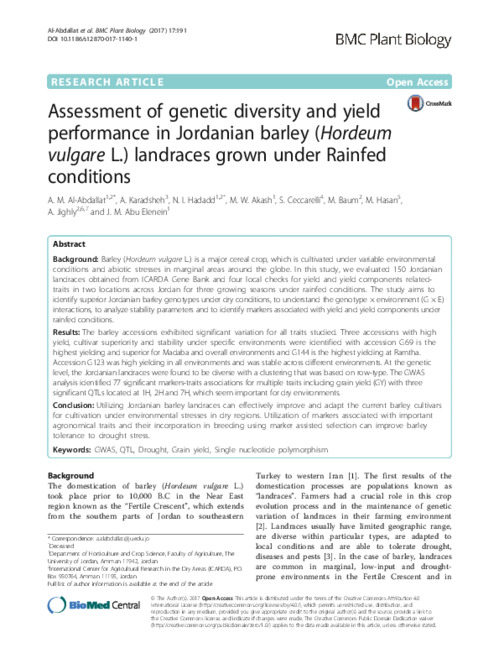 Background: Barley (Hordeum vulgare L.) is a major cereal crop, which is cultivated under variable environmental conditions and abiotic stresses in marginal areas around the globe. In this study, we evaluated 150 Jordanian landraces obtained from ICARDA Gene Bank and four local checks for yield and yield components relatedtraits in two locations across Jordan for three growing seasons under rainfed conditions. The study aims to identify superior Jordanian barley genotypes under dry conditions, to understand the genotype × environment (G × E) interactions, to analyze stability parameters and to identify markers associated with yield and yield components under rainfed conditions. Results: The barley accessions exhibited significant variation for all traits studied. Three accessions with high yield, cultivar superiority and stability under specific environments were identified with accession G69 is the highest yielding and superior for Madaba and overall environments and G144 is the highest yielding at Ramtha. Accession G123 was high yielding in all environments and was stable across different environments. At the genetic level, the Jordanian landraces were found to be diverse with a clustering that was based on row-type. The GWAS analysis identified 77 significant markers-traits associations for multiple traits including grain yield (GY) with three significant QTLs located at 1H, 2H and 7H, which seem important for dry environments. Conclusion: Utilizing Jordanian barley landraces can effectively improve and adapt the current barley cultivars for cultivation under environmental stresses in dry regions. Utilization of markers associated with important agronomical traits and their incorporation in breeding using marker assisted selection can improve barley tolerance to drought stress.