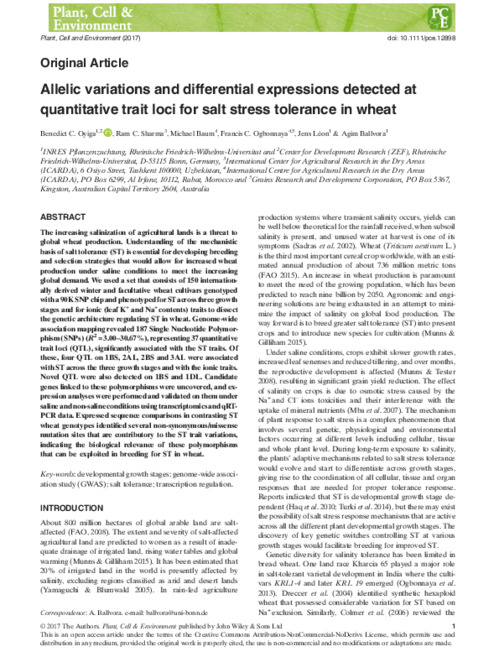 The increasing salinization of agricultural lands is a threat to global wheat production. Understanding of the mechanistic basis of salt tolerance (ST) is essential for developing breeding and selection strategies that would allow for increased wheat production under saline conditions to meet the increasing global demand. We used a set that consists of 150 internationally derived winter and facultative wheat cultivars genotyped with a 90K SNP chip andphenotyped for STacross three growth stages and for ionic (leaf K+ and Na+ contents) traits to dissect the genetic architecture regulating ST in wheat. Genome-wide association mapping revealed 187 Single Nucleotide Polymorphism (SNPs) (R2 = 3.00–30.67%), representing 37 quantitative trait loci (QTL), significantly associated with the ST traits. Of these, four QTL on 1BS, 2AL, 2BS and 3AL were associated with STacross the three growth stages and with the ionic traits. Novel QTL were also detected on 1BS and 1DL. Candidate genes linked to these polymorphisms were uncovered, and expression analyses were performed and validated on them under saline and non-saline conditions using transcriptomics and qRTPCR data. Expressed sequence comparisons in contrasting ST wheat genotypes identified several non-synonymous/missense mutation sites that are contributory to the ST trait variations, indicating the biological relevance of these polymorphisms that can be exploited in breeding for ST in wheat.