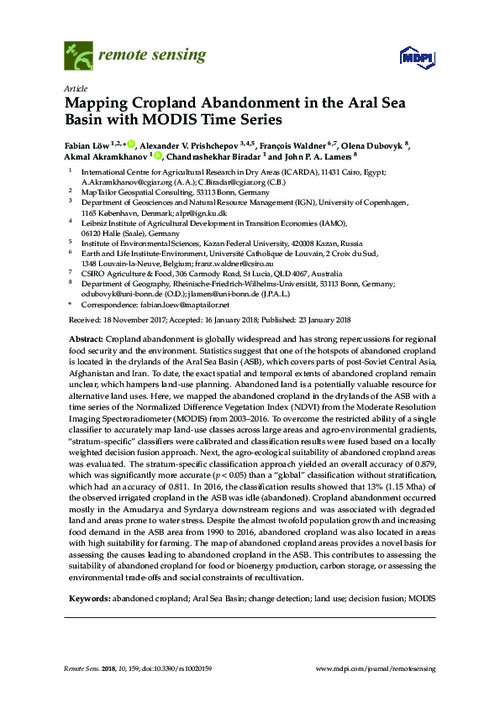 Cropland abandonment is globally widespread and has strong repercussions for regional food security and the environment. Statistics suggest that one of the hotspots of abandoned cropland is located in the drylands of the Aral Sea Basin (ASB), which covers parts of post-Soviet Central Asia, Afghanistan and Iran. To date, the exact spatial and temporal extents of abandoned cropland remain unclear, which hampers land-use planning. Abandoned land is a potentially valuable resource for alternative land uses. Here, we mapped the abandoned cropland in the drylands of the ASB with a time series of the Normalized Difference Vegetation Index (NDVI) from the Moderate Resolution Imaging Spectroradiometer (MODIS) from 2003–2016. To overcome the restricted ability of a single classifier to accurately map land-use classes across large areas and agro-environmental gradients, “stratum-specific” classifiers were calibrated and classification results were fused based on a locally weighted decision fusion approach. Next, the agro-ecological suitability of abandoned cropland areas was evaluated. The stratum-specific classification approach yielded an overall accuracy of 0.879, which was significantly more accurate (p < 0.05) than a “global” classification without stratification, which had an accuracy of 0.811. In 2016, the classification results showed that 13% (1.15 Mha) of the observed irrigated cropland in the ASB was idle (abandoned). Cropland abandonment occurred mostly in the Amudarya and Syrdarya downstream regions and was associated with degraded land and areas prone to water stress. Despite the almost twofold population growth and increasing food demand in the ASB area from 1990 to 2016, abandoned cropland was also located in areas with high suitability for farming. The map of abandoned cropland areas provides a novel basis for assessing the causes leading to abandoned cropland in the ASB. This contributes to assessing the suitability of abandoned cropland for food or bioenergy production, carbon storage, or assessing the environmental trade-offs and social constraints of recultivation.