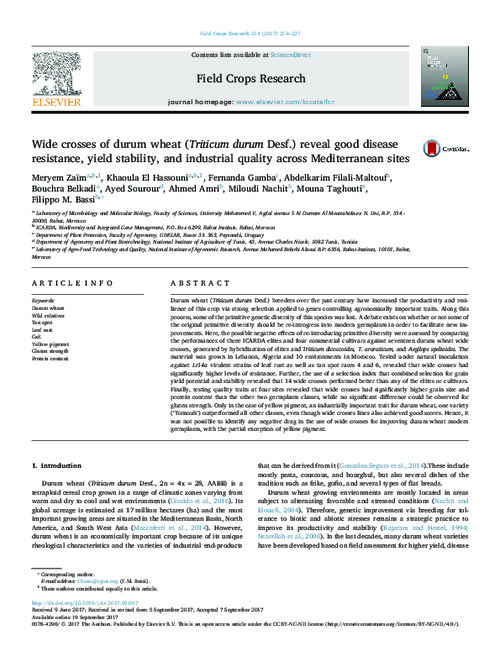 Durum wheat (Triticum durum Desf.) breeders over the past century have increased the productivity and resilience of this crop via strong selection applied to genes controlling agronomically important traits. Along this process, some of the primitive genetic diversity of this species was lost. A debate exists on whether or not some of the original primitive diversity should be re-introgress into modern germplasm in order to facilitate new improvements. Here, the possible negative effects of re-introducing primitive diversity were assessed by comparing the performances of three ICARDA elites and four commercial cultivars against seventeen durum wheat wide crosses, generated by hybridization of elites and Triticum dicoccoides, T. araraticum, and Aegilops speltoides. The material was grown in Lebanon, Algeria and 10 environments in Morocco. Tested under natural inoculation against Lr14a virulent strains of leaf rust as well as tan spot races 4 and 6, revealed that wide crosses had significantly higher levels of resistance. Further, the use of a selection index that combined selection for grain yield potential and stability revealed that 14 wide crosses performed better than any of the elites or cultivars. Finally, testing quality traits at four sites revealed that wide crosses had significantly higher grain size and protein content than the other two germplasm classes, while no significant difference could be observed for gluten strength. Only in the case of yellow pigment, an industrially important trait for durum wheat, one variety (‘Tomouh’) outperformed all other classes, even though wide crosses lines also achieved good scores. Hence, it was not possible to identify any negative drag in the use of wide crosses for improving durum wheat modern germplasm, with the partial exception of yellow pigment.