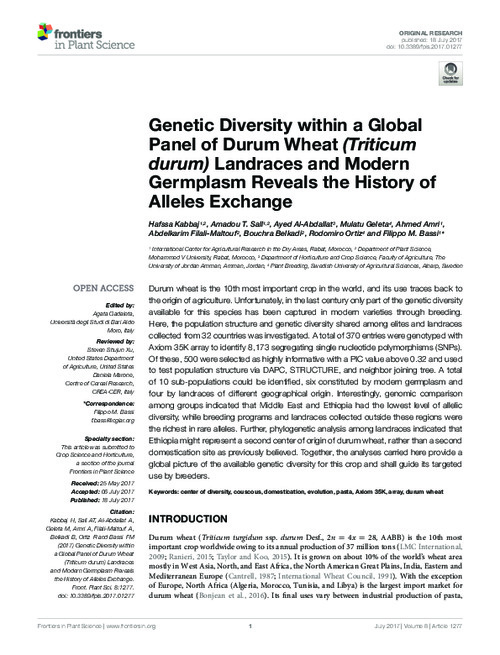 Durum wheat is the 10th most important crop in the world, and its use traces back to the origin of agriculture. Unfortunately, in the last century only part of the genetic diversity available for this species has been captured in modern varieties through breeding. Here, the population structure and genetic diversity shared among elites and landraces collected from 32 countries was investigated. A total of 370 entries were genotyped with Axiom 35K array to identify 8,173 segregating single nucleotide polymorphisms (SNPs). Of these, 500 were selected as highly informative with a PIC value above 0.32 and used to test population structure via DAPC, STRUCTURE, and neighbor joining tree. A total of 10 sub-populations could be identified, six constituted by modern germplasm and four by landraces of different geographical origin. Interestingly, genomic comparison among groups indicated that Middle East and Ethiopia had the lowest level of allelic diversity, while breeding programs and landraces collected outside these regions were the richest in rare alleles. Further, phylogenetic analysis among landraces indicated that Ethiopia might represent a second center of origin of durum wheat, rather than a second domestication site as previously believed. Together, the analyses carried here provide a global picture of the available genetic diversity for this crop and shall guide its targeted use by breeders.