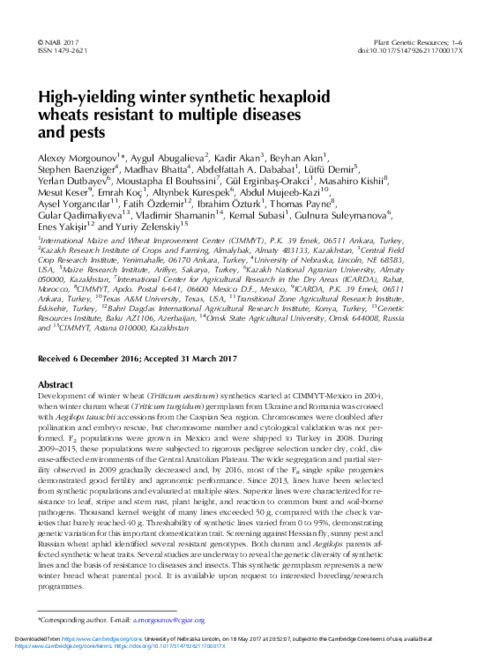 Development of winter wheat (Triticum aestivum) synthetics started at CIMMYT-Mexico in 2004, when winter durum wheat (Triticum turgidum) germplasm from Ukraine and Romania was crossed with Aegilops tauschii accessions from the Caspian Sea region. Chromosomes were doubled after pollination and embryo rescue, but chromosome number and cytological validation was not performed. F2 populations were grown in Mexico and were shipped to Turkey in 2008. During 2009–2015, these populations were subjected to rigorous pedigree selection under dry, cold, disease-affected environments of the Central Anatolian Plateau. The wide segregation and partial sterility observed in 2009 gradually decreased and, by 2016, most of the F8 single spike progenies demonstrated good fertility and agronomic performance. Since 2013, lines have been selected from synthetic populations and evaluated at multiple sites. Superior lines were characterized for resistance to leaf, stripe and stem rust, plant height, and reaction to common bunt and soil-borne pathogens. Thousand kernel weight of many lines exceeded 50 g, compared with the check varieties that barely reached 40 g. Threshability of synthetic lines varied from 0 to 95%, demonstrating genetic variation for this important domestication trait. Screening against Hessian fly, sunny pest and Russian wheat aphid identified several resistant genotypes. Both durum and Aegilops parents affected synthetic wheat traits. Several studies are underway to reveal the genetic diversity of synthetic lines and the basis of resistance to diseases and insects. This synthetic germplasm represents a new winter bread wheat parental pool. It is available upon request to interested breeding/research programmes.