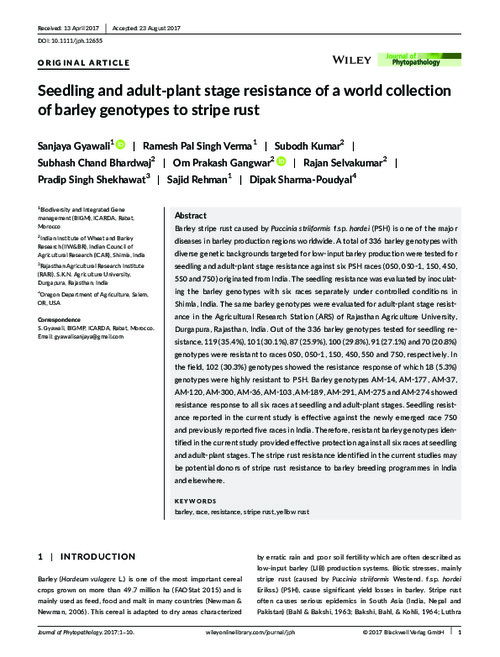 Barley stripe rust caused by Puccinia striiformis f.sp. hordei (PSH) is one of the major diseases in barley production regions worldwide. A total of 336 barley genotypes with diverse genetic backgrounds targeted for low-input barley production were tested for seedling and adult-plant stage resistance against six PSH races (0S0, 0S0-1, 1S0, 4S0, 5S0 and 7S0) originated from India. The seedling resistance was evaluated by inoculating the barley genotypes with six races separately under controlled conditions in Shimla, India. The same barley genotypes were evaluated for adult-plant stage resistance in the Agricultural Research Station (ARS) of Rajasthan Agriculture University, Durgapura, Rajasthan, India. Out of the 336 barley genotypes tested for seedling resistance, 119 (35.4%), 101 (30.1%), 87 (25.9%), 100 (29.8%), 91 (27.1%) and 70 (20.8%) genotypes were resistant to races 0S0, 0S0-1, 1S0, 4S0, 5S0 and 7S0, respectively. In the field, 102 (30.3%) genotypes showed the resistance response of which 18 (5.3%) genotypes were highly resistant to PSH. Barley genotypes AM-14, AM-177, AM-37, AM-120, AM-300, AM-36, AM-103, AM-189, AM-291, AM-275 and AM-274 showed resistance response to all six races at seedling and adult-plant stages. Seedling resistance reported in the current study is effective against the newly emerged race 7S0 and previously reported five races in India. Therefore, resistant barley genotypes identified in the current study provided effective protection against all six races at seedling and adult-plant stages. The stripe rust resistance identified in the current studies may be potential donors of stripe rust resistance to barley breeding programmes in India and elsewhere.