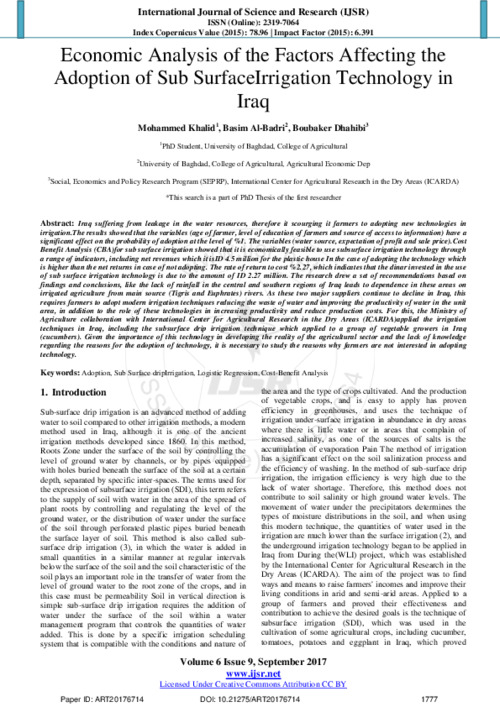 Iraq suffering from leakage in the water resources, therefore it scourging it farmers to adopting new technologies in irrigation. The results showed that the variables (age of farmer, level of education of farmers and source of access to information) have a significant effect on the probability of adoption at the level of %1. The variables (water source, expectation of profit and sale price).Cost Benefit Analysis (CBA)for sub surface irrigation showed that it is economically feasible to use subsurface irrigation technology through a range of indicators, including net revenues which it isID 4.5 million for the plastic house In the case of adopting the technology which is higher than the net returns in case of not adopting. The rate of return to cost %2.27, which indicates that the dinar invested in the use of sub surface irrigation technology is due to the amount of ID 2.27 million. The research drew a set of recommendations based on findings and conclusions, like the lack of rainfall in the central and southern regions of Iraq leads to dependence in these areas on irrigated agriculture from main source (Tigris and Euphrates) rivers. As these two major suppliers continue to decline in Iraq, this requires farmers to adopt modern irrigation techniques reducing the waste of water and improving the productivity of water in the unit area, in addition to the role of these technologies in increasing productivity and reduce production costs. For this, the Ministry of Agriculture collaboration with International Center for Agricultural Research in the Dry Areas (ICARDA) applied the irrigation techniques in Iraq, including the subsurface drip irrigation technique which applied to a group of vegetable growers in Iraq (cucumbers). Given the importance of this technology in developing the reality of the agricultural sector and the lack of knowledge regarding the reasons for the adoption of technology, it is necessary to study the reasons why farmers are not interested in adopting technology.