EFFECT OF POTATO (Solanum tuberosum L.) CROPPING SYSTEMS ON SOIL AND NUTRIENT LOSSES THROUGH RUNOFF IN A HUMIC NITISOL 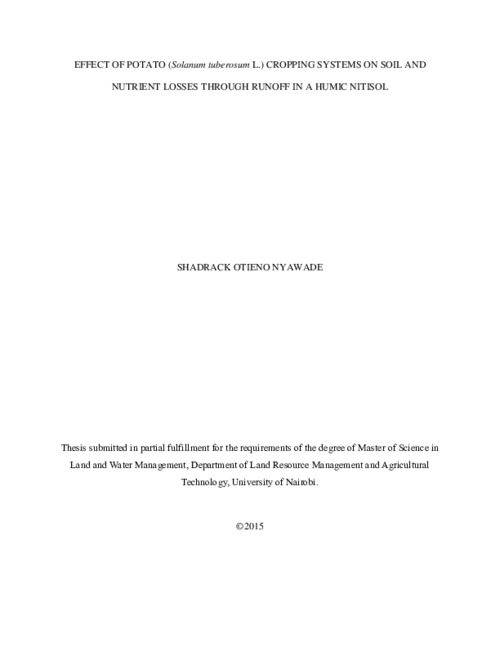 A field study was carried out using runoff plots during the short and long rainy seasons of 2014 and 2015 respectively at the Field Station of Upper Kabete Campus, University of Nairobi. The objectives of the study were to assess the effect of soil surface roughness and potato cropping systems on soil loss and runoff, to determine the effect of erosion on nutrient enrichment ratio and to evaluate the SOM fraction most susceptible to soil erosion. The treatments comprised of Bare Soil (T1); Potato + Garden Pea (Pisum sativa) (T2); Potato + Climbing Bean (Phaseolus vulgaris) (T3); Potato + Dolichos (Lablab purpureus) (T4) and Sole Potato (Solanum tuberosum L.) (T5). Soil loss and runoff recorded in each event differed significantly between treatments (p<0.05) and were consistently highest in T1 and lowest in T4. Mean cumulative soil loss from T5, T2, T3 and T4 was 39.2, 31.8, 23.5 and 11.0% respectively compared to bare plots, suggesting that T4 plots provided the most effective cover in reducing soil loss. Intercropping potatoes with cover crops reduced runoff by 22-72% when compared with the sole potato, and by 55 to 84% when compared with the bare plots. Regression analyses revealed that both runoff and soil loss related significantly with surface roughness and percent cover (R2 =0.83 and 0.73 respectively, p<0.05). Statistically significant linear dependence of runoff and soil loss on surface roughness and crop cover was found in T4 (p<0.05) indicating that this system was highly effective in minimizing soil loss and runoff. Enrichment ratio was on average greater than unity for all soil elements analyzed indicating that the erosion process was selective. The correlation coefficients between enrichment ratio of clay and soil nutrients showed strong associations, the highest being with P (r=0.88) and the lowest with K (r=0.75), suggesting that clay particles better account for nutrient losses. Concentrations of SOM in the eroded sediment were higher in the stable fraction, MOC (18.43-19.30 g kg-1 ), MN (1.67-1.93 g kg-1 ) than in the labile fraction, POC (7.72-9.39 g kg-1 ), PN (0.62-0.84 g kg-1 ) indicating that much of the eroded SOM was in stable form. The highest decline in SOM contents occurred in stable fractions in which MOC reduced by 6.2 to 22% while MN reduced by 6.1 to 21%.