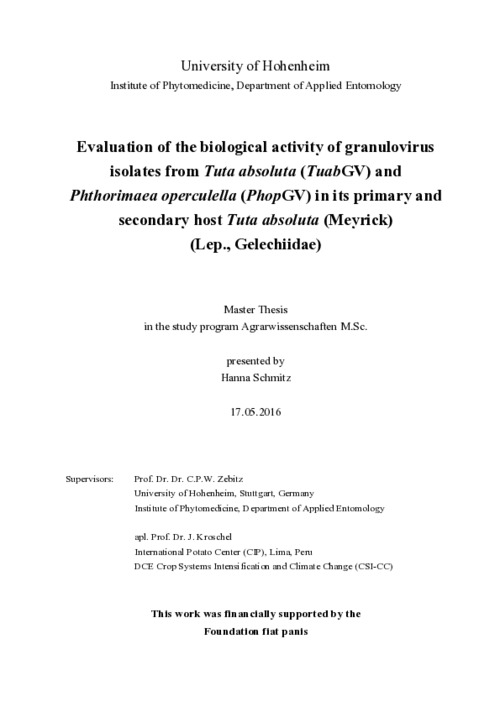 The tomato leafminer, Tuta absoluta (Meyrick), is an insect pest of worldwide importance. By attacking primarily tomato (Solanum lycopersicum L.), but also potato (Solanum tuberosum L.) and various other crops, it reduces yield and income of small-scale subsistence farmers, as well as of large-scale tomato producers in South America, Africa, Europe and the Middle East. In this study five isolates of the Phthorimaea operculella granulovirus (PhopGV) from different regions primarily from Peru (Cuzco, Huancayo, Huaraz, La Molina) and Chile were tested together with two isolates of the Tuta absoluta granulovirus (TuabGV) from Peru (La Molina and St. Rita (Arequipa)) to identify the most effective isolates for a potential development as biological insecticide against T. absoluta. The efficacy of all seven isolates against T. absoluta was examined in an egg dip bioassay at five concentrations (2.50E+05 OBs/ml, 5.00E+06 OBs/ml, 7.50E+07 OBs/ml, 3.00E+08 OBs/ml, and 6.15E+08 OBs/ml). As a result, PhopGV Huancayo, TuabGV La Molina, and TuabGV St. Rita (Arequipa) were considered most promising, showing the best efficacies. A probit analysis resulted in LC50, LC95, and LC99 values of 4.27E+08 - 2.05E+09 OBs/ml, 1.95E+09 - 9.56E+09 OBs/ml, and 2.23E+09 - 1.27E+10 OBs/ml, respectively. These mathematically derived lethal concentrations led to the conclusion that a successful control may require higher virus concentrations than used in this study. Two of the promising isolates (PhopGV Huancayo and TuabGV La Molina) were examined further. The efficacy of these selected isolates against the four larval instars of T. absoluta, as well as the persistence of the virus over seven days were examined on virus-treated tomato plants under laboratory conditions. The results led to the assumption that the susceptibility of the larvae towards the GV was not affected by larval age. Furthermore, the examination of the virus stability revealed no decrease of biological activity for both isolates over a timespan of seven days, which indicates a high persistence of the virus. In summary, the findings suggest PhopGV as well as TuabGV as potential biological insecticide against T. absoluta and furthermore three particularly promising isolates could be identified. The findings gained in this study may contribute to the development of a sustainable control strategy of T. absoluta.