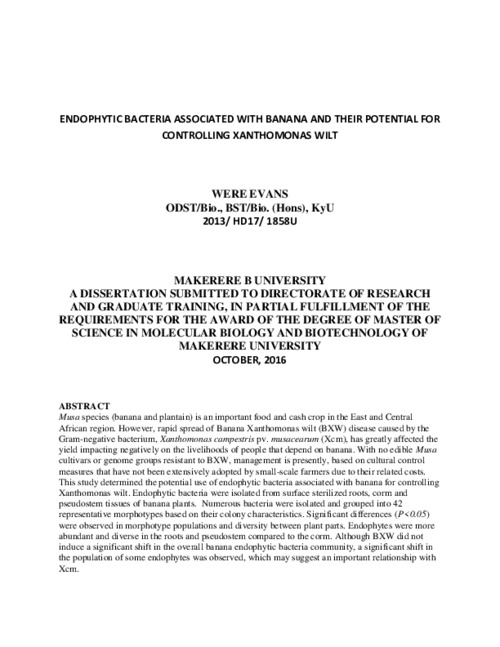 Musa species (banana and plantain) is an important food and cash crop in the East and Central African region. However, rapid spread of Banana Xanthomonas wilt (BXW) disease caused by the Gram-negative bacterium, Xanthomonas campestris pv. musacearum (Xcm), has greatly affected the yield impacting negatively on the livelihoods of people that depend on banana. With no edible Musa cultivars or genome groups resistant to BXW, management is presently, based on cultural control measures that have not been extensively adopted by small-scale farmers due to their related costs. This study determined the potential use of endophytic bacteria associated with banana for controlling Xanthomonas wilt. Endophytic bacteria were isolated from surface sterilized roots, corm and pseudostem tissues of banana plants. Numerous bacteria were isolated and grouped into 42 representative morphotypes based on their colony characteristics. Significant differences (P<0.05) were observed in morphotype populations and diversity between plant parts. Endophytes were more abundant and diverse in the roots and pseudostem compared to the corm. Although BXW did not induce a significant shift in the overall banana endophytic bacteria community, a significant shift in the population of some endophytes was observed, which may suggest an important relationship with Xcm.