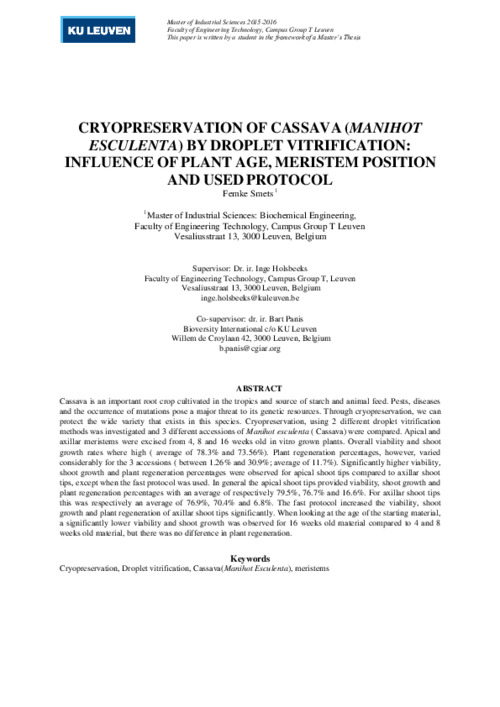 Cassava is an important root crop cultivated in the tropics and source of starch and animal feed. Pests, diseases and the occurrence of mutations pose a major threat to its genetic resources. Through cryopreservation, we can protect the wide variety that exists in this species. Cryopreservation, using 2 different droplet vitrification methods was investigated and 3 different accessions of Manihot esculenta ( Cassava) were compared. Apical and axillar meristems were excised from 4, 8 and 16 weeks old in vitro grown plants. Overall viability and shoot growth rates where high ( average of 78.3% and 73.56%). Plant regeneration percentages, however, varied considerably for the 3 accessions ( between 1.26% and 30.9%; average of 11.7%). Significantly higher viability, shoot growth and plant regeneration percentages were observed for apical shoot tips compared to axillar shoot tips, except when the fast protocol was used. In general the apical shoot tips provided viability, shoot growth and plant regeneration percentages with an average of respectively 79.5%, 76.7% and 16.6%. For axillar shoot tips this was respectively an average of 76.9%, 70.4% and 6.8%. The fast protocol increased the viability, shoot growth and plant regeneration of axillar shoot tips significantly. When looking at the age of the starting material, a significantly lower viability and shoot growth was observed for 16 weeks old material compared to 4 and 8 weeks old material, but there was no difference in plant regeneration.