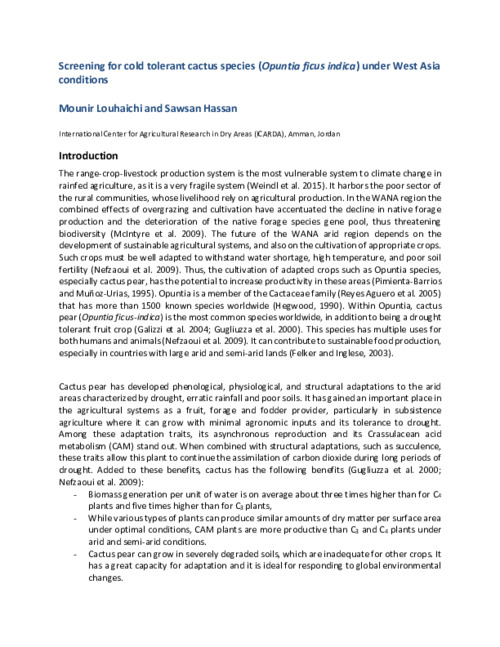 Cactus pear has developed phenological, physiological, and structural adaptations to the arid areas characterized by drought, erratic rainfall and poor soils. It has gained an important place in the agricultural systems as a fruit, forage and fodder provider, particularly in subsistence agriculture where it can grow with minimal agronomic inputs and its tolerance to drought. Nevertheless, despite the great capacity for adaptation and their ability to grow in harsh environments which are not favorable for the production of most common crops, frost risk can be considered as one of the major limitation to cactus growing in the WANA region as well as in many parts of the world. Using a randomized complete block design (RCBD) with five replicates, 42 accessions of Opuntia ficus indica (Cactus inermis), imported from various locations (North Africa, Italy and Mexico), were planted in April 2013 in Muchaqqar Research Station. The evaluation took place over winter, from 2015, 2016 and 2017, although no frost events were recorded in 2017. Frost damage was recorded visually after each frost event in each year (values ranged from 1, regarded as fully damaged, to 5, regarded as no damage occurred on the cactus cladode). After counting the number of cladodes per plant, five cladodes from each established plant were cut and weighed, to estimate the cladode green biomass weight. The size of each cladode, length and width, was also measured. Significant differences in cold/freezing tolerance, cladode number per plant and cladode fresh weight (g), tolerance of frost and The average cladode weights Among tested cactus pear accessions were detected (P<0.01). COPENA V1, 74115_Bab Toza, and 74001 cultivars produced the highest number of pads per plant, accessions 69223_Burbank Azrou, 2_25_15 and Bianca de Bonacardo demonstrated the most frost tolerance and accessions 69242_Matmata, 69246_Oueslatia, and COPENA V1 recorded the highest cladode average weights. Results from this study are beneficial to the adoption of cactus, in arid regions of West Asia, this present significant potential to improve livestock production and create alternative income generation options for resource poor farmers in this region