What Are The Factors Affecting No-Till Adoption In The Farming System Of Sétif Province In Algeria? 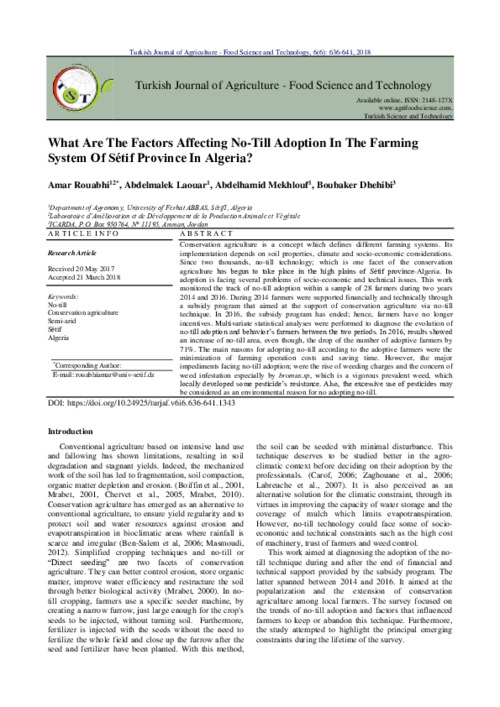 Conservation agriculture is a concept which defines different farming systems. Its implementation depends on soil properties, climate and socio-economic considerations. Since two thousands, no-till technology; which is one facet of the conservation agriculture has begun to take place in the high plains of Sétif province-Algeria. Its adoption is facing several problems of socio-economic and technical issues. This work monitored the track of no-till adoption within a sample of 28 farmers during two years 2014 and 2016. During 2014 farmers were supported financially and technically through a subsidy program that aimed at the support of conservation agriculture via no-till technique. In 2016, the subsidy program has ended; hence, farmers have no longer incentives. Multivariate statistical analyses were performed to diagnose the evolution of no-till adoption and behavior’s farmers between the two periods. In 2016, results showed an increase of no-till area, even though, the drop of the number of adoptive farmers by 71%. The main reasons for adopting no-till according to the adoptive farmers were the minimization of farming operation costs and saving time. However, the major impediments facing no-till adoption; were the rise of weeding charges and the concern of weed infestation especially by bromus.sp, which is a vigorous prevalent weed, which locally developed some pesticide’s resistance. Also, the excessive use of pesticides may be considered as an environmental reason for no adopting no-till.