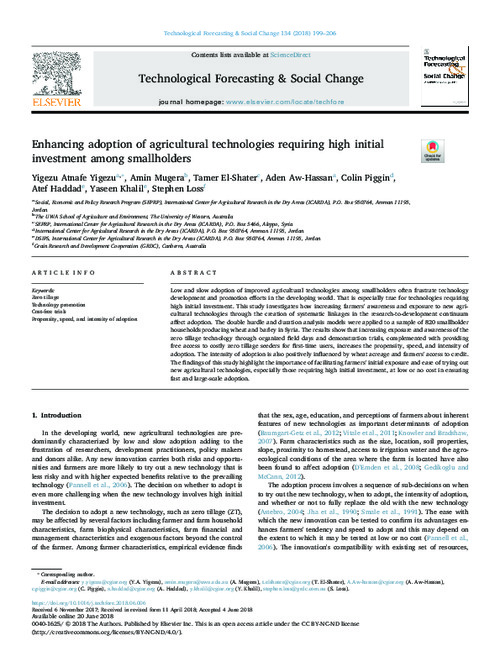 Low and slow adoption of improved agricultural technologies among smallholders often frustrate technology development and promotion efforts in the developing world. That is especially true for technologies requiring high initial investment. This study investigates how increasing farmers' awareness and exposure to new agricultural technologies through the creation of systematic linkages in the research-to-development continuum affect adoption. The double hurdle and duration analysis models were applied to a sample of 820 smallholder households producing wheat and barley in Syria. The results show that increasing exposure and awareness of the zero tillage technology through organized field days and demonstration trials, complemented with providing free access to costly zero tillage seeders for first-time users, increases the propensity, speed, and intensity of adoption. The intensity of adoption is also positively influenced by wheat acreage and farmers' access to credit. The findings of this study highlight the importance of facilitating farmers' initial exposure and ease of trying out new agricultural technologies, especially those requiring high initial investment, at low or no cost in ensuring fast and large-scale adoption.