Farming with Alternative Pollinators (FAP) – A practical guide for smallholders 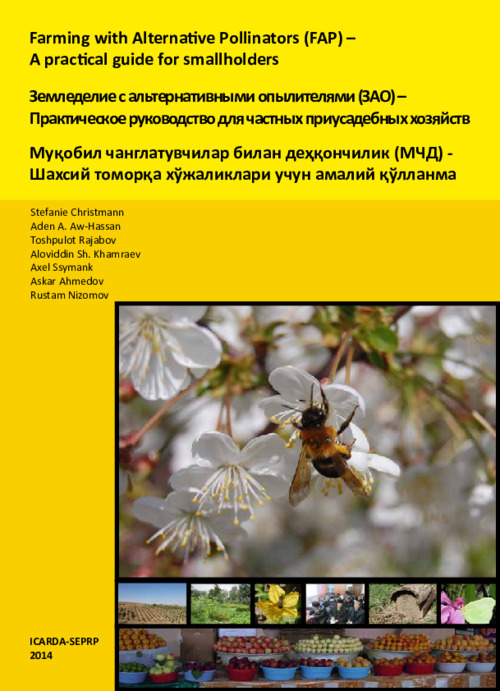 Pollinators play a key-role in agriculture, for biodiversity protection, ecosystems and climate change adaptation. But globally rapid decline of wild pollinators threatens mankind; honeybees cannot compensate the losses. Central Asia has been identified as the second most vulnerable area worldwide concerning economic loss in consequence of pollinator loss. But that study did not take climate change into account, which is above average in Central Asia and a major risk for pollinators, because it interrupts the timely synchrony of plant pollinator interaction and leads to high loss of biodiversity. In Uzbekistan climate change might also induce a shift from crops not requiring pollinators, but a lot of water – like rice, wheat and maize – to fruits, vegetables and oil seeds requiring less water but pollinators. Farming with Alternative Pollinators (FAP) enhances climate change resilience of ago-ecosystems and income of farmers simultaneously. High biodiversity of pollinators leads to higher quantity and better quality of many crops. Therefore, FAP uses a part of the field or the orchard for habitat enhancement for pollinators, but though in total the income can be much higher for many crops than on control fields having the main crop in the entire area. Also FAP-fields attract predators, which reduce pests. FAP is a low-cost method; the farmer investing some time and thoughts on habitat enhancement can gain much higher income from his or her plot by small efforts. This makes FAP an economically self-sustaining climate smart innovation and valuable worldwide. Currently, FAP is the only available self-sustaining method to combat the global pollinator crisis.