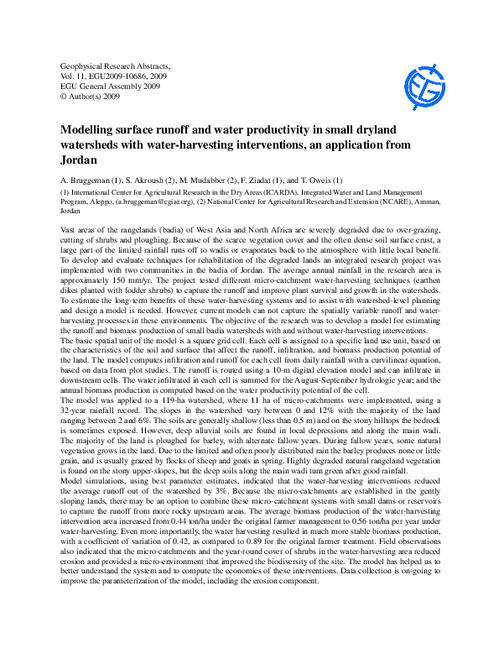 Vast areas of the rangelands (badia) of West Asia and North Africa are severely degraded due to over-grazing, cutting of shrubs and ploughing. Because of the scarce vegetation cover and the often dense soil surface crust, a large part of the limited rainfall runs off to wadis or evaporates back to the atmosphere with little local benefit. To develop and evaluate techniques for rehabilitation of the degraded lands an integrated research project was implemented with two communities in the badia of Jordan. The average annual rainfall in the research area is approximately 150 mm/yr. The project tested different micro-catchment water-harvesting techniques (earthen dikes planted with fodder shrubs) to capture the runoff and improve plant survival and growth in the watersheds. To estimate the long-term benefits of these water-harvesting systems and to assist with watershed-level planning and design a model is needed. However, current models can not capture the spatially variable runoff and waterharvesting processes in these environments. The objective of the research was to develop a model for estimating the runoff and biomass production of small badia watersheds with and without water-harvesting interventions. The basic spatial unit of the model is a square grid cell. Each cell is assigned to a specific land use unit, based on the characteristics of the soil and surface that affect the runoff, infiltration, and biomass production potential of the land. The model computes infiltration and runoff for each cell from daily rainfall with a curvilinear equation, based on data from plot studies. The runoff is routed using a 10-m digital elevation model and can infiltrate in downstream cells. The water infiltrated in each cell is summed for the August-September hydrologic year; and the annual biomass production is computed based on the water productivity potential of the cell. The model was applied to a 119-ha watershed, where 11 ha of micro-catchments were implemented, using a 32-year rainfall record. The slopes in the watershed vary between 0 and 12% with the majority of the land ranging between 2 and 6%. The soils are generally shallow (less than 0.5 m) and on the stony hilltops the bedrock is sometimes exposed. However, deep alluvial soils are found in local depressions and along the main wadi. The majority of the land is ploughed for barley, with alternate fallow years. During fallow years, some natural vegetation grows in the land. Due to the limited and often poorly distributed rain the barley produces none or little grain, and is usually grazed by flocks of sheep and goats in spring. Highly degraded natural rangeland vegetation is found on the stony upper-slopes, but the deep soils along the main wadi turn green after good rainfall. Model simulations, using best parameter estimates, indicated that the water-harvesting interventions reduced the average runoff out of the watershed by 3%. Because the micro-catchments are established in the gently sloping lands, there may be an option to combine these micro-catchment systems with small dams or reservoirs to capture the runoff from more rocky upstream areas. The average biomass production of the water-harvesting intervention area increased from 0.44 ton/ha under the original farmer management to 0.56 ton/ha per year under water-harvesting. Even more importantly, the water harvesting resulted in much more stable biomass production, with a coefficient of variation of 0.42, as compared to 0.89 for the original farmer treatment. Field observations also indicated that the micro-catchments and the year-round cover of shrubs in the water-harvesting area reduced erosion and provided a micro-environment that improved the biodiversity of the site. The model has helped us to better understand the system and to compute the economics of these interventions. Data collection is on-going to improve the parameterization of the model, including the erosion component.