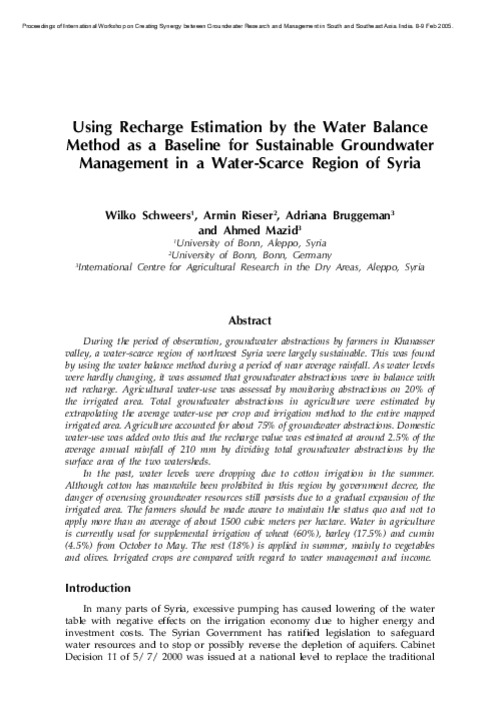 During the period of observation, groundwater abstractions by farmers in Khanasser valley, a water-scarce region of northwest Syria were largely sustainable. This was found by using the water balance method during a period of near average rainfall. As water levels were hardly changing, it was assumed that groundwater abstractions were in balance with net recharge. Agricultural water-use was assessed by monitoring abstractions on 20% of the irrigated area. Total groundwater abstractions in agriculture were estimated by extrapolating the average water-use per crop and irrigation method to the entire mapped irrigated area. Agriculture accounted for about 75% of groundwater abstractions. Domestic water-use was added onto this and the recharge value was estimated at around 2.5% of the average annual rainfall of 210 mm by dividing total groundwater abstractions by the surface area of the two watersheds. In the past, water levels were dropping due to cotton irrigation in the summer. Although cotton has meanwhile been prohibited in this region by government decree, the danger of overusing groundwater resources still persists due to a gradual expansion of the irrigated area. The farmers should be made aware to maintain the status quo and not to apply more than an average of about 1500 cubic meters per hectare. Water in agriculture is currently used for supplemental irrigation of wheat (60%), barley (17.5%) and cumin (4.5%) from October to May. The rest (18%) is applied in summer, mainly to vegetables and olives. Irrigated crops are compared with regard to water management and income.