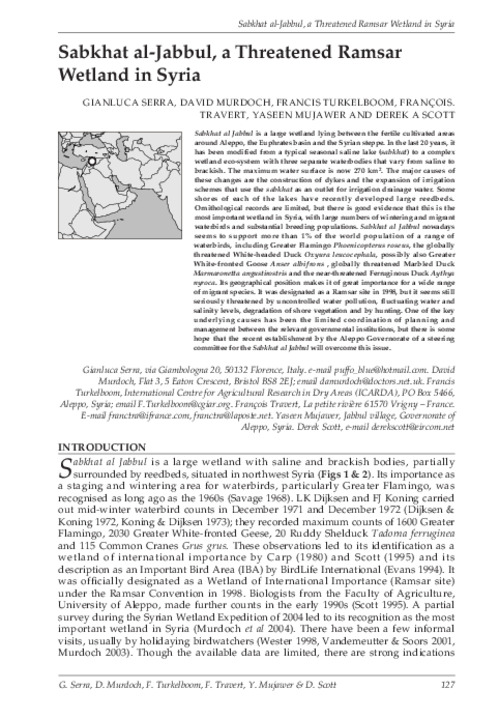 Sabkhat al Jabbul is a large wetland lying between the fertile cultivated areas around Aleppo, the Euphrates basin and the Syrian steppe. In the last 20 years, it has been modified from a typical seasonal saline lake (sabkhat) to a complex wetland eco-system with three separate waterbodies that vary from saline to brackish. The maximum water surface is now 270 km 2 . The major causes of these changes are the construction of dykes and the expansion of irrigation schemes that use the sabkhat as an outlet for irrigation drainage water. Some shores of each of the lakes have recently developed large reedbeds. Ornithological records are limited, but there is good evidence that this is the most important wetland in Syria, with large numbers of wintering and migrant waterbirds and substantial breeding populations. Sabkhat al Jabbul nowadays seems to support more than 1% of the world population of a range of waterbirds, including Greater Flamingo Phoenicopterus roseus, the globally threatened White-headed Duck Oxyura leucocephala, possibly also Greater White-fronted Goose Anser albifrons , globally threatened Marbled Duck Marmaronetta angustirostris and the near-threatened Ferruginous Duck Aythya nyroca. Its geographical position makes it of great importance for a wide range of migrant species. It was designated as a Ramsar site in 1998, but it seems still seriously threatened by uncontrolled water pollution, fluctuating water and salinity levels, degradation of shore vegetation and by hunting. One of the key underlying causes has been the limited coordination of planning and management between the relevant governmental institutions, but there is some hope that the recent establishment by the Aleppo Governorate of a steering committee for the Sabkhat al Jabbul will overcome this issue.