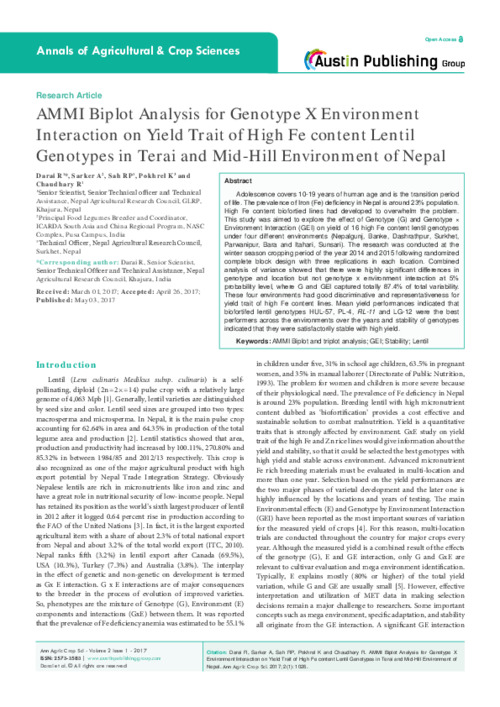 Adolescence covers 10-19 years of human age and is the transition period of life. The prevalence of Iron (Fe) deficiency in Nepal is around 23% population. High Fe content biofortied lines had developed to overwhelm the problem. This study was aimed to explore the effect of Genotype (G) and Genotype × Environment Interaction (GEI) on yield of 16 high Fe content lentil genotypes under four different environments (Nepalgunj, Banke, Dashrathpur, Surkhet, Parwanipur, Bara and Itahari, Sunsari). The research was conducted at the winter season cropping period of the year 2014 and 2015 following randomized complete block design with three replications in each location. Combined analysis of variance showed that there were highly significant differences in genotype and location but not genotype x environment interaction at 5% probability level, where G and GEI captured totally 87.4% of total variability. These four environments had good discriminative and representativeness for yield trait of high Fe content lines. Mean yield performances indicated that biofortifed lentil genotypes HUL-57, PL-4, RL-11 and LG-12 were the best performers across the environments over the years and stability of genotypes indicated that they were satisfactorily stable with high yield.