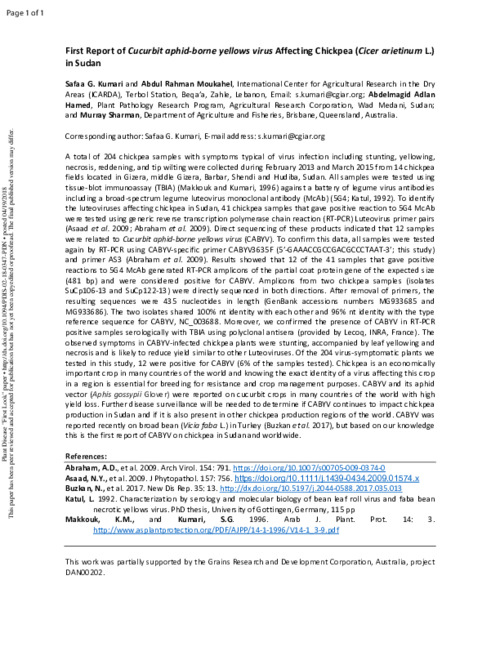 A total of 204 chickpea samples with symptoms typical of virus infection including stunting, yellowing, necrosis, reddening, and tip wilting were collected during February 2013 and March 2015 from 14 chickpea fields located in Gizera, middle Gizera, Barbar, Shendi and Hudiba, Sudan. All samples were tested using tissue-blot immunoassay (TBIA) (Makkouk and Kumari, 1996) against a battery of legume virus antibodies including a broad-spectrum legume luteovirus monoclonal antibody (McAb) (5G4; Katul, 1992). To identify the luteoviruses affecting chickpea in Sudan, 41 chickpea samples that gave positive reaction to 5G4 McAb were tested using generic reverse transcription polymerase chain reaction (RT-PCR) Luteovirus primer pairs (Asaad et al. 2009; Abraham et al. 2009). Direct sequencing of these products indicated that 12 samples were related to Cucurbit aphid-borne yellows virus (CABYV). To confirm this data, all samples were tested again by RT-PCR using CABYV-specific primer CABYV3635F (5’-GAAACCGCCGACGCCCTAAT-3’; this study) and primer AS3 (Abraham et al. 2009). Results showed that 12 of the 41 samples that gave positive reactions to 5G4 McAb generated RT-PCR amplicons of the partial coat protein gene of the expected size (481 bp) and were considered positive for CABYV. Amplicons from two chickpea samples (isolates SuCp106-13 and SuCp122-13) were directly sequenced in both directions. After removal of primers, the resulting sequences were 435 nucleotides in length (GenBank accessions numbers MG933685 and MG933686). The two isolates shared 100% nt identity with each other and 96% nt identity with the type reference sequence for CABYV, NC_003688. Moreover, we confirmed the presence of CABYV in RT-PCR positive samples serologically with TBIA using polyclonal antisera (provided by Lecoq, INRA, France). The observed symptoms in CABYV-infected chickpea plants were stunting, accompanied by leaf yellowing and necrosis and is likely to reduce yield similar to other Luteoviruses. Of the 204 virus-symptomatic plants we tested in this study, 12 were positive for CABYV (6% of the samples tested). Chickpea is an economically important crop in many countries of the world and knowing the exact identity of a virus affecting this crop in a region is essential for breeding for resistance and crop management purposes. CABYV and its aphid vector (Aphis gossypii Glover) were reported on cucurbit crops in many countries of the world with high yield loss. Further disease surveillance will be needed to determine if CABYV continues to impact chickpea production in Sudan and if it is also present in other chickpea production regions of the world. CABYV was reported recently on broad bean (Vicia faba L.) in Turkey (Buzkan et al. 2017), but based on our knowledge this is the first report of CABYV on chickpea in Sudan and worldwide.