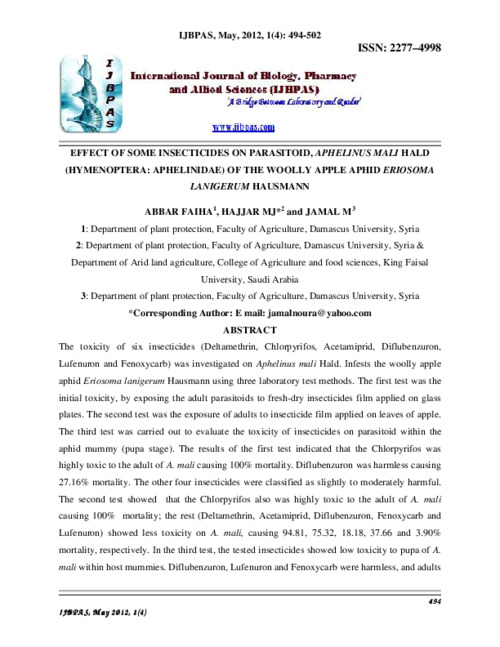 The toxicity of six insecticides (Deltamethrin, Chlorpyrifos, Acetamiprid, Diflubenzuron, Lufenuron and Fenoxycarb) was investigated on Aphelinus mali Hald. Infests the woolly apple aphid Eriosoma lanigerum Hausmann using three laboratory test methods. The first test was the initial toxicity, by exposing the adult parasitoids to fresh-dry insecticides film applied on glass plates. The second test was the exposure of adults to insecticide film applied on leaves of apple. The third test was carried out to evaluate the toxicity of insecticides on parasitoid within the aphid mummy (pupa stage). The results of the first test indicated that the Chlorpyrifos was highly toxic to the adult of A. mali causing 100% mortality. Diflubenzuron was harmless causing 27.16% mortality. The other four insecticides were classified as slightly to moderately harmful. The second test showed that the Chlorpyrifos also was highly toxic to the adult of A. mali causing 100% mortality; the rest (Deltamethrin, Acetamiprid, Diflubenzuron, Fenoxycarb and Lufenuron) showed less toxicity on A. mali, causing 94.81, 75.32, 18.18, 37.66 and 3.90% mortality, respectively. In the third test, the tested insecticides showed low toxicity to pupa of A. mali within host mummies. Diflubenzuron, Lufenuron and Fenoxycarb were harmless, and adults emergence was 19.83, 23.96 and 29.75%, respectively. Deltamethrin, Chlorpyrifos and Acetamiprid were slightly harmful, and adults emerged at 46.67, 48.67 and 52.67%, respectively.