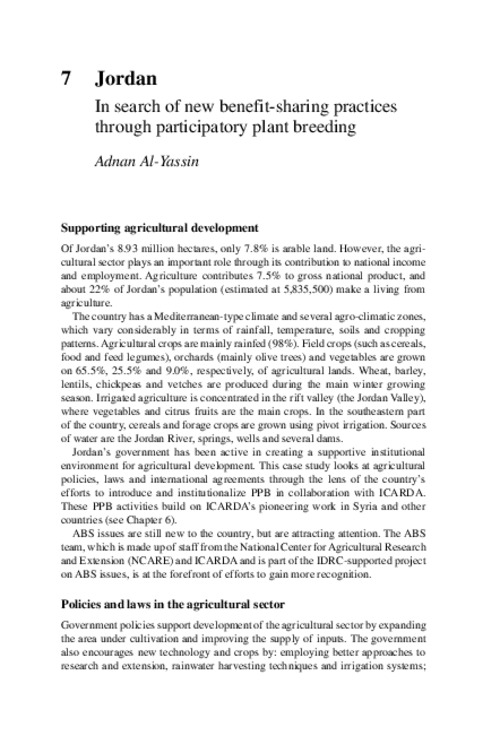 Of Jordan’s 8.93 million hectares, only 7.8% is arable land. However, the agricultural sector plays an important role through its contribution to national income and employment. Agriculture contributes 7.5% to gross national product, and about 22% of Jordan’s population (estimated at 5,835,500) make a living from agriculture. The country has a Mediterranean-type climate and several agro-climatic zones, which vary considerably in terms of rainfall, temperature, soils and cropping patterns. Agricultural crops are mainly rainfed (98%). Field crops (such as cereals, food and feed legumes), orchards (mainly olive trees) and vegetables are grown on 65.5%, 25.5% and 9.0%, respectively, of agricultural lands. Wheat, barley, lentils, chickpeas and vetches are produced during the main winter growing season. Irrigated agriculture is concentrated in the rift valley (the Jordan Valley), where vegetables and citrus fruits are the main crops. In the southeastern part of the country, cereals and forage crops are grown using pivot irrigation. Sources of water are the Jordan River, springs, wells and several dams. Jordan’s government has been active in creating a supportive institutional environment for agricultural development. This case study looks at agricultural policies, laws and international agreements through the lens of the country’s efforts to introduce and institutionalize PPB in collaboration with ICARDA. These PPB activities build on ICARDA’s pioneering work in Syria and other countries (see Chapter 6). ABS issues are still new to the country, but are attracting attention. The ABS team, which is made up of staff from the National Center for Agricultural Research and Extension (NCARE) and ICARDA and is part of the IDRC-supported project on ABS issues, is at the forefront of efforts to gain more recognition.