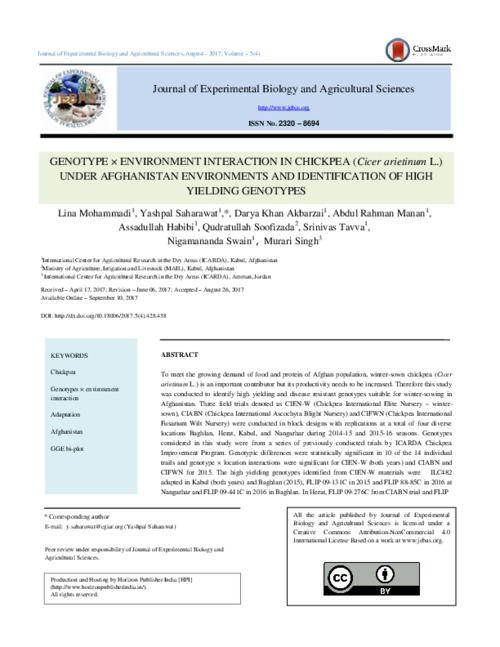 To meet the growing demand of food and protein of Afghan population, winter-sown chickpea (Cicer arietinum L.) is an important contributor but its productivity needs to be increased. Therefore this study was conducted to identify high yielding and disease resistant genotypes suitable for winter-sowing in Afghanistan. Three field trials denoted as CIEN-W (Chickpea International Elite Nursery – wintersown), CIABN (Chickpea International Ascochyta Blight Nursery) and CIFWN (Chickpea International Fusarium Wilt Nursery) were conducted in block designs with replications at a total of four diverse locations Baghlan, Herat, Kabul, and Nangarhar during 2014-15 and 2015-16 seasons. Genotypes considered in this study were from a series of previously conducted trials by ICARDA Chickpea Improvement Program. Genotypic differences were statistically significant in 10 of the 14 individual trails and genotype × location interactions were significant for CIEN-W (both years) and CIABN and CIFWN for 2015. The high yielding genotypes identified from CIEN-W materials were ILC482 adapted in Kabul (both years) and Baghlan (2015), FLIP 09-131C in 2015 and FLIP 88-85C in 2016 at Nangarhar and FLIP 09-441C in 2016 in Baghlan. In Herat, FLIP 09-276C from CIABN trial and FLIP.