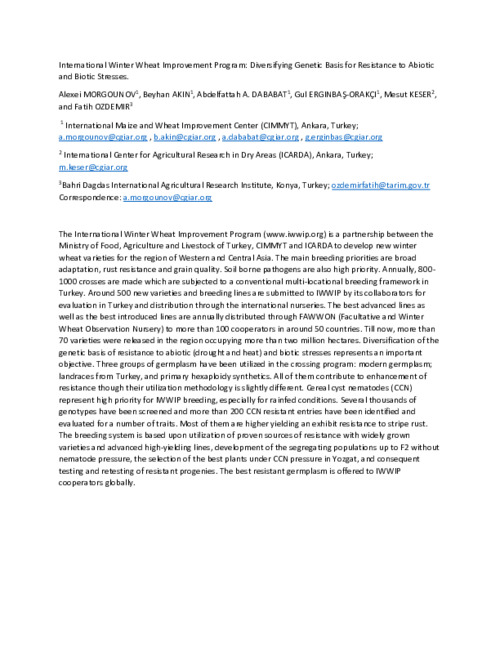 The International Winter Wheat Improvement Program (www.iwwip.org) is a partnership between the Ministry of Food, Agriculture and Livestock of Turkey, CIMMYT and ICARDA to develop new winter wheat varieties for the region of Western and Central Asia. The main breeding priorities are broad adaptation, rust resistance and grain quality. Soil borne pathogens are also high priority. Annually, 800-1000 crosses are made which are subjected to a conventional multi-locational breeding framework in Turkey. Around 500 new varieties and breeding lines are submitted to IWWIP by its collaborators for evaluation in Turkey and distribution through the international nurseries. The best advanced lines as well as the best introduced lines are annually distributed through FAWWON (Facultative and Winter Wheat Observation Nursery) to more than 100 cooperators in around 50 countries. Till now, more than 70 varieties were released in the region occupying more than two million hectares. Diversification of the genetic basis of resistance to abiotic (drought and heat) and biotic stresses represents an important objective. Three groups of germplasm have been utilized in the crossing program: modern germplasm; landraces from Turkey, and primary hexaploidy synthetics. All of them contribute to enhancement of resistance though their utilization methodology is slightly different. Cereal cyst nematodes (CCN) represent high priority for IWWIP breeding, especially for rainfed conditions. Several thousands of genotypes have been screened and more than 200 CCN resistant entries have been identified and evaluated for a number of traits. Most of them are higher yielding an exhibit resistance to stripe rust. The breeding system is based upon utilization of proven sources of resistance with widely grown varieties and advanced high-yielding lines, development of the segregating populations up to F2 without nematode pressure, the selection of the best plants under CCN pressure in Yozgat, and consequent testing and retesting of resistant progenies. The best resistant germplasm is offered to IWWIP cooperators globally.