An Examination of Technical, Economic, Allocative Efficiency and Economic Impacts of Salinity on Livelihoods: The Case of Al-Musayyeb Farms in Iraq 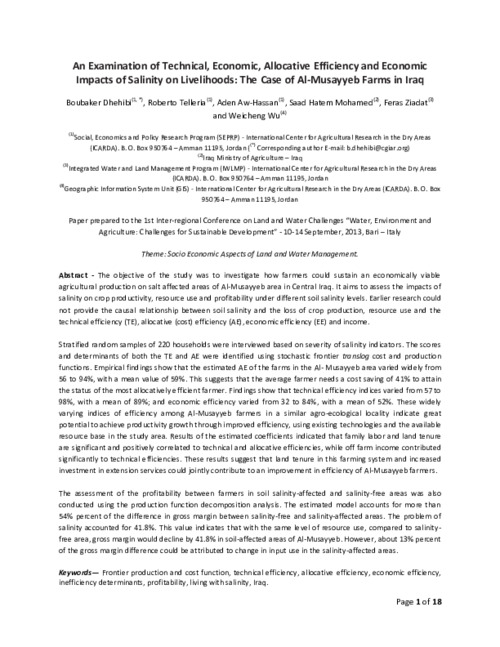 The objective of the study was to investigate how farmers could sustain an economically viable agricultural production on salt affected areas of Al-Musayyeb area in Central Iraq. It aims to assess the impacts of salinity on crop productivity, resource use and profitability under different soil salinity levels. Earlier research could not provide the causal relationship between soil salinity and the loss of crop production, resource use and the technical efficiency (TE), allocative (cost) efficiency (AE), economic efficiency (EE) and income. Stratified random samples of 220 households were interviewed based on severity of salinity indicators. The scores and determinants of both the TE and AE were identified using stochastic frontier translog cost and production functions. Empirical findings show that the estimated AE of the farms in the Al- Musayyeb area varied widely from 56 to 94%, with a mean value of 59%. This suggests that the average farmer needs a cost saving of 41% to attain the status of the most allocatively efficient farmer. Findings show that technical efficiency indices varied from 57 to 98%, with a mean of 89%; and economic efficiency varied from 32 to 84%, with a mean of 52%. These widely varying indices of efficiency among Al-Musayyeb farmers in a similar agro-ecological locality indicate great potential to achieve productivity growth through improved efficiency, using existing technologies and the available resource base in the study area. Results of the estimated coefficients indicated that family labor and land tenure are significant and positively correlated to technical and allocative efficiencies, while off farm income contributed significantly to technical efficiencies. These results suggest that land tenure in this farming system and increased investment in extension services could jointly contribute to an improvement in efficiency of Al-Musayyeb farmers. The assessment of the profitability between farmers in soil salinity-affected and salinity-free areas was also conducted using the production function decomposition analysis. The estimated model accounts for more than 54% percent of the difference in gross margin between salinity-free and salinity-affected areas. The problem of salinity accounted for 41.8%. This value indicates that with the same level of resource use, compared to salinity-free area, gross margin would decline by 41.8% in soil-affected areas of Al-Musayyeb. However, about 13% percent of the gross margin difference could be attributed to change in input use in the salinity-affected areas.