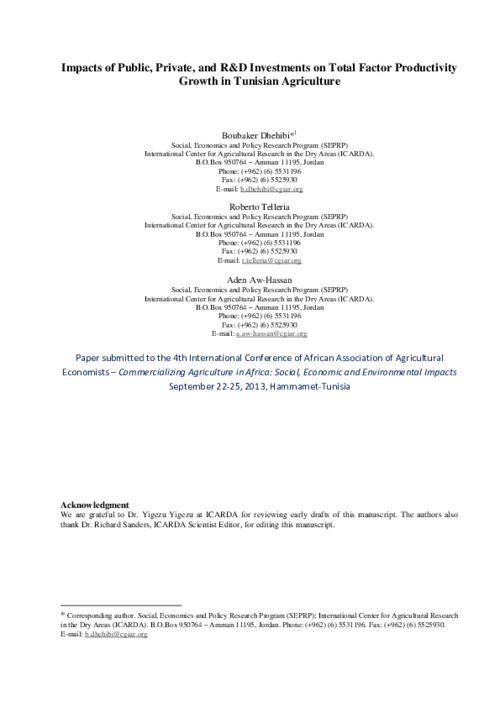 The paper analyzes the patterns of productivity and economic growth in Tunisian agriculture during the period 1981–2007. A regression approach is used to test the hypotheses that government-funded research, development and extension (RD&E), private and investment, terms of trade, and share of irrigated area are significant determinants of total factor productivity (TFP) in the agricultural sector. Results indicate that agricultural output experienced moderate annual growth between 1981 and 2007. Over the whole period, land and capital were found to be the most important contributors to productivity, and labour and livestock the least significant. TFP contribution to agricultural output was important in the 1980s, less important in the 1990s, and became significant again between 2001 and 2007. The findings show that TFP growth was the result of investments in the agricultural sector, with the use of intensive irrigated production systems and the adoption of new production technologies. We found significant negative cross-price elasticities between labour and capital suggesting that agricultural policies in the form of subsidies for agricultural machinery could be introduced without negatively affecting the agricultural labour force. Finally, Tunisian government should strengthen its domestic agricultural research system through a variety of policy tools that include joint public-private partnerships.