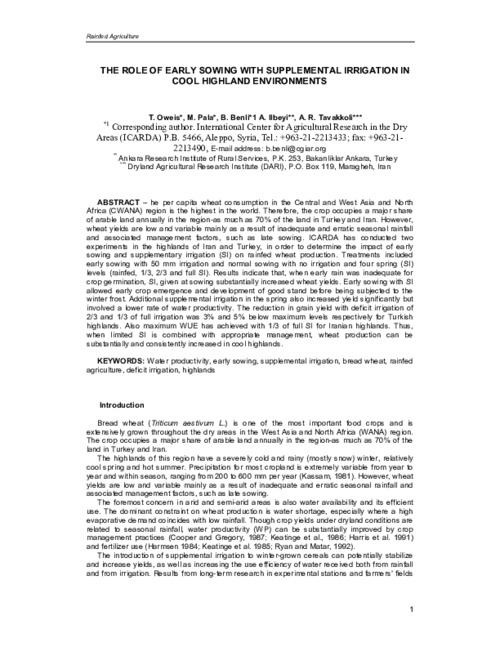 The per capita wheat consumption in the Central and West Asia and North Africa (CWANA) region is the highest in the world. Therefore, the crop occupies a major share of arable land annually in the region-as much as 70% of the land in Turkey and Iran. However, wheat yields are low and variable mainly as a result of inadequate and erratic seasonal rainfall and associated management factors, such as late sowing. ICARDA has conducted two experiments in the highlands of Iran and Turkey, in order to determine the impact of early sowing and supplementary irrigation (51) on rainfed wheat production. Treatments included early sowing with 50 mm irrigation and normal sowing with no irrigation and four spring (51) levels (rainfed, 1/3, 2/3 and full 51). Results indicate that, when early rain was inadequate for crop germination, 51, given at sowing substantially increased wheat yields. Early sowing with 51 allowed early crop emergence and development of good stand before being subjected to the winter frost. Additional supplemental irrigation in the spring also increased yield significantly but involved a lower rate of water productivity. The reduction in grain yield with deficit irrigation of 2/3 and 1/3 of full irrigation was 3% and 5% below maximum levels respectively for Turkish highlands. Also maximum WUE has achieved with 1/3 of full 51 for Iranian highlands. Thus, when limited 51 is combined with appropriate management, wheat production can be substantially and consistently increased in cool highlands.