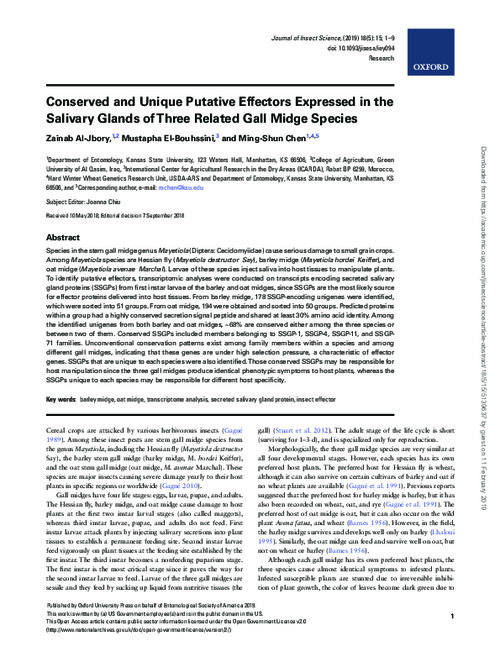 Species in the stem gall midge genus Mayetiola (Diptera: Cecidomyiidae) cause serious damage to small grain crops. Among Mayetiola species are Hessian ﬂy (Mayetiola destructor Say), barley midge (Mayetiola hordei Keiffer), and oat midge (Mayetiola avenae Marchal). Larvae of these species inject saliva into host tissues to manipulate plants. To identify putative effectors, transcriptomic analyses were conducted on transcripts encoding secreted salivary gland proteins (SSGPs) from first instar larvae of the barley and oat midges, since SSGPs are the most likely source for effector proteins delivered into host tissues. From barley midge, 178 SSGP-encoding unigenes were identified, which were sorted into 51 groups. From oat midge, 194 were obtained and sorted into 50 groups. Predicted proteins within a group had a highly conserved secretion signal peptide and shared at least 30% amino acid identity. Among the identified unigenes from both barley and oat midges, ~68% are conserved either among the three species or between two of them. Conserved SSGPs included members belonging to SSGP-1, SSGP-4, SSGP-11, and SSGP-71 families. Unconventional conservation patterns exist among family members within a species and among different gall midges, indicating that these genes are under high selection pressure, a characteristic of effector genes. SSGPs that are unique to each species were also identified. Those conserved SSGPs may be responsible for host manipulation since the three gall midges produce identical phenotypic symptoms to host plants, whereas the SSGPs unique to each species may be responsible for different host specificity.