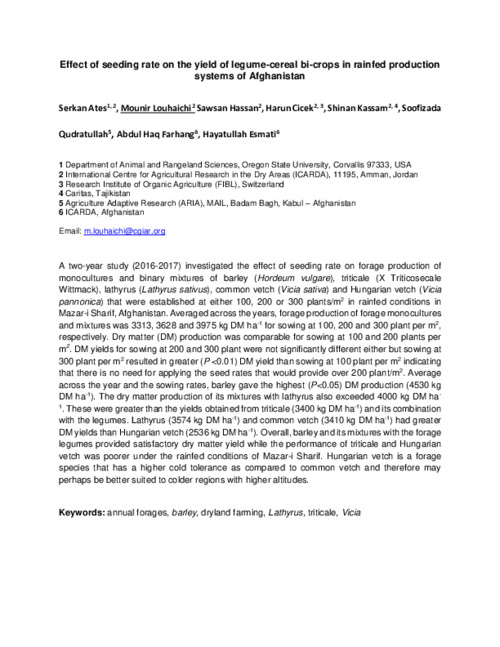 A two-year study (2016-2017) investigated the effect of seeding rate on forage production of monocultures and binary mixtures of barley (Hordeum vulgare), triticale (X Triticosecale Wittmack), lathyrus (Lathyrus sativus), common vetch (Vicia sativa) and Hungarian vetch (Vicia pannonica) that were established at either 100, 200 or 300 plants/m2 in rainfed conditions in Mazar-i Sharif, Afghanistan. Averaged across the years, forage production of forage monocultures and mixtures was 3313, 3628 and 3975 kg DM ha-1 for sowing at 100, 200 and 300 plant per m2, respectively. Dry matter (DM) production was comparable for sowing at 100 and 200 plants per m2. DM yields for sowing at 200 and 300 plant were not significantly different either but sowing at 300 plant per m2 resulted in greater (P <0.01) DM yield than sowing at 100 plant per m2 indicating that there is no need for applying the seed rates that would provide over 200 plant/m2. Average across the year and the sowing rates, barley gave the highest (P<0.05) DM production (4530 kg DM ha-1). The dry matter production of its mixtures with lathyrus also exceeded 4000 kg DM ha-1. These were greater than the yields obtained from triticale (3400 kg DM ha-1) and its combination with the legumes. Lathyrus (3574 kg DM ha-1) and common vetch (3410 kg DM ha-1) had greater DM yields than Hungarian vetch (2536 kg DM ha-1). Overall, barley and its mixtures with the forage legumes provided satisfactory dry matter yield while the performance of triticale and Hungarian vetch was poorer under the rainfed conditions of Mazar-i Sharif. Hungarian vetch is a forage species that has a higher cold tolerance as compared to common vetch and therefore may perhaps be better suited to colder regions with higher altitudes.