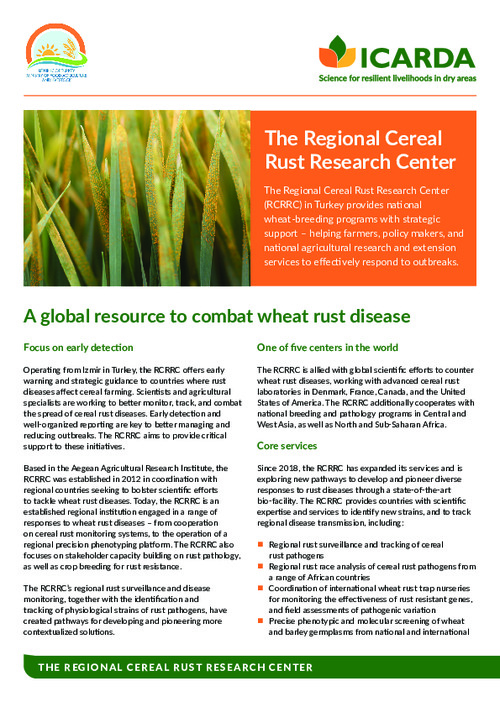 Cereal rust diseases pose a profound threat to sustainable worldwide production. With current changes in temperature and rainfall patterns, aggressive and unprecedented strains of these diseases are newly appearing in many locations. In the past decade alone, for example, stripe rust has affected wheat harvests in Syria, Iran, Turkey, Ethiopia, Morocco, and several countries in West Asia, as well as Central and South Asia. To effectively combat this challenge, the world’s international agricultural research centers, national partners, and wheat growing countries are intensifying their cooperation to better prevent the spread of rust. These strategies include surveillance and early warning systems to track the spread of disease, together with enhanced breeding programs to continually develop new and more durable rust-resistant varieties. The RCRRC is located in Izmir, Turkey, at the heart of the “Wheat Belt” – a territory linking Central and West Asia with North, East, and Southern Africa. Combined, these areas produce roughly 40 percent of the world’s total wheat and barley production. Turkey’s Mediterranean climate provides the optimal conditions in which to evaluate regional and international plant genetic materials against races of the three cereal rusts: stripe rust, stem rust, and leaf rust.