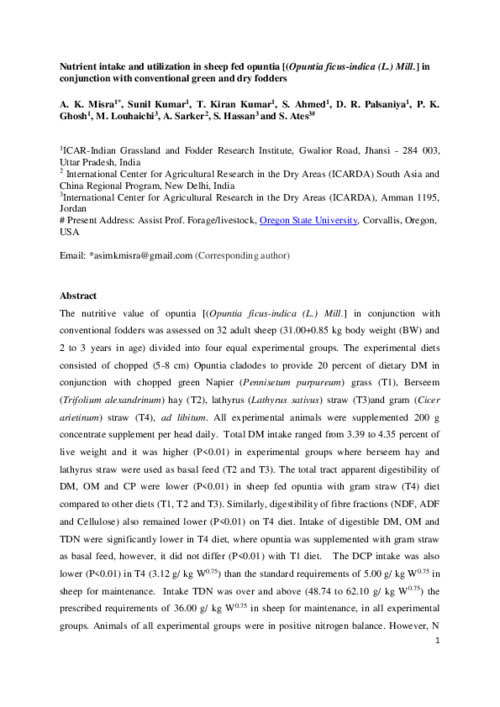 The nutritive value of opuntia [(Opuntia ficus-indica (L.) Mill.] in combination with conventional fodders was assessed on 32 adult sheep, divided into 4 equal groups. The experimental diets consisted of chopped (5-8 cm) green opuntia cladodes (150 g on dry matter basis per head daily) in combination with chopped green napier (Pennisetum purpureum) grass (T1), berseem (Trifolium alexandrinum) hay (T2), lathyrus (Lathyrus sativus) straw (T3) and gram (Cicer arietinum) straw (T4) ad libitum. All experimental animals were supplemented with 200 g concentrate mixture per head daily. Total DM intake ranged from 3.39 to 4.35 per cent of live weight and it was higher (P<0.01) in experimental groups where berseem hay and lathyrus straw were used as basal feed (T2 and T3). The total tract apparent digestibility of DM, OM and CP were lower (P<0.01) in sheep fed opuntia with gram straw (T4) diet compared to other diets (T1, T2 and T3). Similarly digestibility of fibre fractions (NDF, ADF and cellulose) was also lower (P<0.01) on T4 diet. Intake of digestible DM, OM and TDN were significantly lower in T4 diet, where opuntia was supplemented with gram straw as basal feed, however, it did not differ (P<0.01) with T1 diet. The DCP intake was lower (P<0.01) in T4 (3.12 g/ kgW0.75) when compared to the standard requirements of 5.00 g/kgW0.75 in sheep for maintenance. But intake of TDN was over and above (48.74 to 62.10 g/kgW0.75) the prescribed requirements of 36.00 g/kgW0.75 in sheep for maintenance when considered for all the groups. Animals of all the experimental groups were in positive nitrogen balance. However, N intake, balance, absorb and retention were lower (P<0.01) in T4 diet compared to other diets, but the N excretion through faeces and urine was similar in T1 and T4; and T2 and T3. No significant (P<0.01) changes in live weight were observed and animals maintained the live weight throughout the experimental period. It was evident from the results that opuntia was highly palatable and in combination with conventional fodder sources could maintain adult sheep during summer in semi-arid conditions.