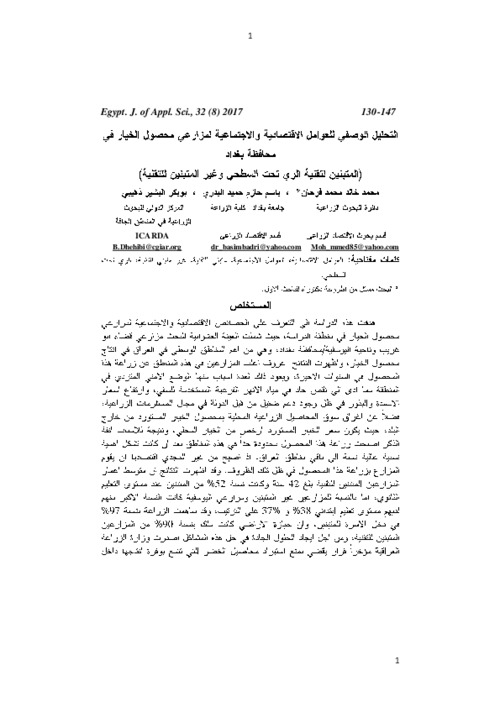 The objective of this study was to identify the economic and social characteristics of cucumber farmers in the study area. The random sample included farmers from Abu Ghraib district and Yusufiya, Baghdad governorate, which is the most important central region in Iraq. areas for the cultivation of this crop in recent years, due to several reasons, including the deteriorating security situation in the region, which led to a severe shortage of water sub-rivers used for irrigation, high fertilizer and seed prices as there is little support by the state in the field of agricultural inputs As well as flooding the local agricultural crops market crop imported cucumber from outside the country (Abo Graib and Yusufiya), where the importer cucumber price cheaper than the local cucumber, as a result of the reasons aforementioned became the cultivation of this crop is very limited in these areas after they constitute a high relative importance relative to the rest of Iraq. As it became not economically feasible to farm the cultivation of this crop under those circumstances. In order to find serious solutions in solving these problems, the Iraqi Ministry of Agriculture recently issued a decision to ban the import of vegetable crops, which enjoys abundant production within the country, including the cucumber crop. This decision can be exploited to bring about a change in guiding farmers to focus on these crops and improve production.