Superior and yet Not Sown? The Impact of Improved Winter and Spring Wheat Varieties in Turkey 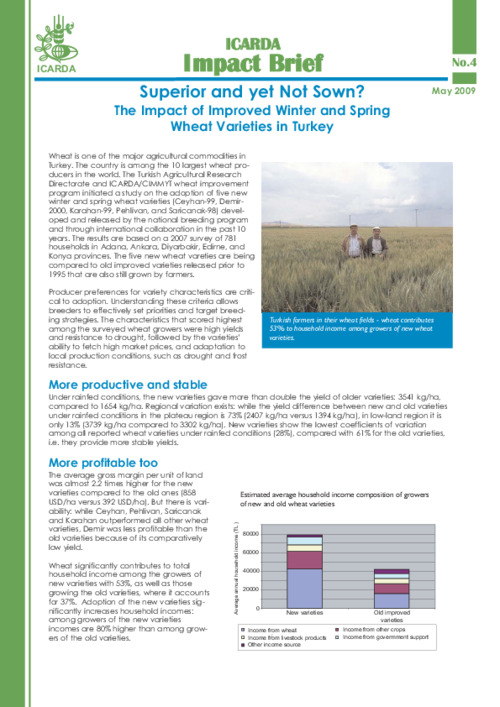 Communication Team ICARDA. (1/5/2009). Superior and yet Not Sown? The Impact of Improved Winter and Spring Wheat Varieties in Turkey. Aleppo, Syria: International Center for Agricultural Research in the Dry Areas (ICARDA).

Wheat is one of the major agricultural commodities in Turkey. The country is among the 10 largest wheat producers in the world. The Turkish Agricultural Research Directorate and ICARDA/CIMMYT wheat improvement program initiated a study on the adoption of five new winter and spring wheat varieties (Ceyhan-99, Demir2000, Karahan-99, Pehlivan, and Saricanak-98) developed and released by the national breeding program and through international collaboration in the past 10 years. The results are based on a 2007 survey of 781 households in Adana, Ankara, Diyarbakir, Edirne, and Konya provinces. The five new wheat vareties are being compared to old improved varieties released prior to 1995 that are also still grown by farmers.