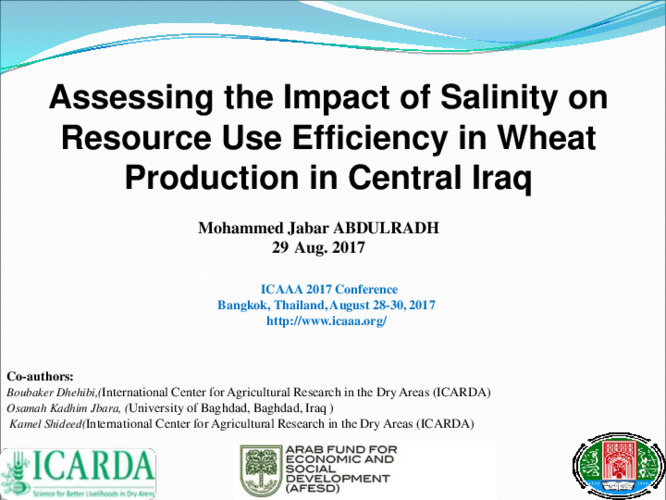 The objective of this study is to investigate the impact of salinity on resource use efficiency in wheat production in central Iraq using a cross-sectional database of 270 farmers. A parametric approach used to estimate a frontier of production. Stochastic Frontier analysis (SFA) is proposed for analysis resources use efficiency in irrigated wheat production system with respect to soil electric conductivity value. The results showed that, inputs such fertilizer and water were underutilized, while other inputs such as agricultural chemical, seed, labour, and mechanization were over-utilized. Based on scale elasticity value, yield of wheat could be increased by 13.9, 8.5, and 5 % on average in low, moderate and, high soil salinity respectively, through the efficiency improvement of inputs use. Thus, soil salinity reduction plan for reclaimed, semi-reclaimed, and un-reclaimed need to be established in order to increase resources use efficiency and productivity in the Iraqi irrigated wheat areas.