Summary Report on Impact of Winter Chickpea Technology in Syria 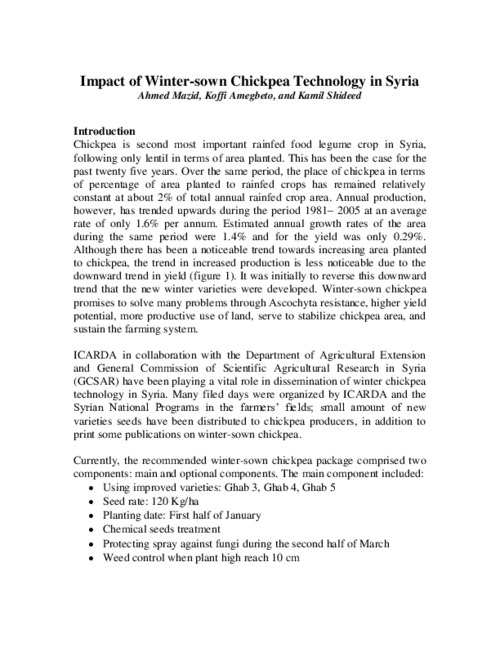 Chickpea is second most important rainfed food legume crop in Syria, following only lentil in terms of area planted. This has been the case for the past twenty five years. Over the same period, the place of chickpea in terms of percentage of area planted to rainfed crops has remained relatively constant at about 2% of total annual rainfed crop area. Annual production, however, has trended upwards during the period 1981– 2005 at an average rate of only 1.6% per annum. Estimated annual growth rates of the area during the same period were 1.4% and for the yield was only 0.29%. Although there has been a noticeable trend towards increasing area planted to chickpea, the trend in increased production is less noticeable due to the downward trend in yield (figure 1). It was initially to reverse this downward trend that the new winter varieties were developed. Winter-sown chickpea promises to solve many problems through Ascochyta resistance, higher yield potential, more productive use of land, serve to stabilize chickpea area, and sustain the farming system.